The Universe of Fair 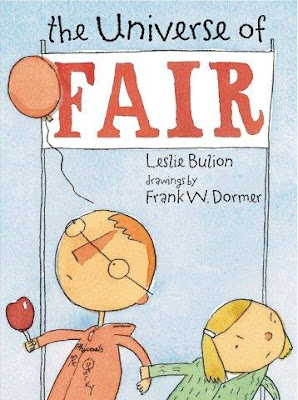 Miller Sanford is a science whiz impatient for the "big fair" when he can finally unveil his secret project and "wow" everyone in town. Going to the fair has been a family event, but this year Miller's saving up his coins and lobbying to go on his own. He's even been babysitting his younger sister to show just how responsible he can be.

On fair day his mother can't go and his father has to put in an extra shift at one of the volunteer booths. Instead of enjoying a day with his bud at the fair, Miller ends up in a string of mishaps involving a cemetery, a pie, first-grade tag-alongs as well as balloons and fair fare.

What I love about this book is it's fun and quirky take on science. On the first page Miller's riding home on the school bus thinking about how, if his "molecules and atoms and electrons and quarks were put together in a different way, [he] could just as easily be an earthworm."

And that his fair exhibit is on the "Theory of Everything".

And that it has string theory. String Theory!

Plus the chapter titles are way cool:
his is part of the Marvelous Middle-Grade Monday round-up. Check out more great reading here. Review copy from publisher.