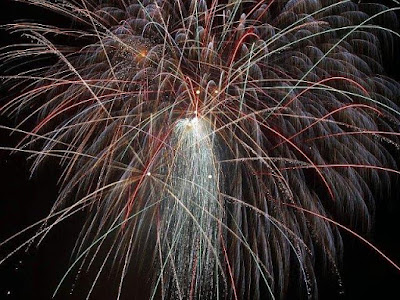 These Books Have Gone to the Dogs!

I love stories about dogs. Even better are books that are written by the dogs themselves - or at least from their point of view. Here are three, recently published by Peachtree Publishers. 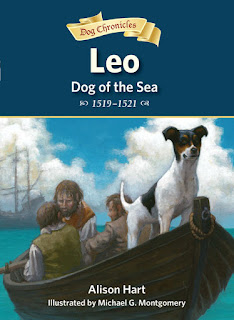 The year is 1519 and Leo has hopped aboard one of Ferdinand Magellan's ships. Leo's had lots of experience hunting and catching rats on ships, so he thinks this will be one more voyage. What he doesn't know is this ship is headed on a westward journey that circumnavigate the globe.

The journey begins as any good seafaring adventure should: with 60 days of stormy weather, followed by becalmed seas in the equatorial seas. Humans turn against each other, reinforcing Leo's belief that people should not be trusted. And yet... he makes friends.

We see, through a dog's eyes, a journey to Brazil, sailing down the coast to a land of penguins and frozen seas; starving sailors who skin and roast the rats Leo provides; a mutiny - or two; hubris when Magellan involves himself in island politics and meets his untimely demise.

What I like about this book: aside from the excitement of adventure and exploration, is the Back Matter. Yes, Hart includes an author's note about the real history behind the story. "There are no records of a dog on board any of Magellan's ships," she writes. "However, dogs have long been used in Spain to control mice and rats." So there probably were dogs aboard the vessels in Magellan's fleet. She includes a glossary and a diagram of a sixteenth-century ship, further reading, and more. 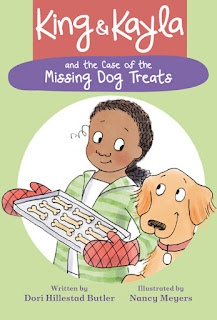 How can you not want to read a book that starts out, "Hello! My name is King. I'm a dog. This is Kayla. She is my human."

Kayla is making peanut butter dog treats - King's favorite. But she won't let him have one until they have cooled. She won't even let him lick the bowl! 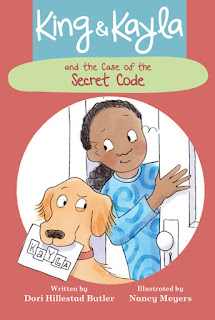 And then... some treats go missing. King smells an intruder! He tries to tell Kayla, but she doesn't understand him... and accuses him of snitching the cookies! You will want to read it to learn how King proves he's innocent and brings the culprit to justice.

In the Case of the Secret Code, King and Kayla team up to solve the mystery of who is leaving letters around, and what the code means. Moral of the story: if you're delivering secret messages, the dog will sniff you out!

On Monday we'll be hanging out on Marvelous Middle Grade Monday with other  bloggers over at Shannon Messenger's blog. Hop over to see what other people are reading. Review copies provided by publisher.

End of School and Underwater Games


It’s getting close to the end of the school year here. The time when you clean out your cubbie, wash crayon marks off your desk, and say goodbye to your friends and teachers. Maybe promise to meet at the park for some games of follow the leader. 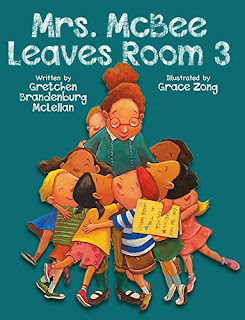 It’s the end of the school year and all the kids are getting ready to leave. So is their teacher, Mrs. McBee. She won’t be back in the fall. Before she leaves for the summer, she gets all the kids involved in cleaning up and releasing the butterflies. The kids don hardhats and get to work – all except William, who sits in the thinking corner.

When the boxes are loaded and gone, no one can find William. Where is he?

This is a delightful story about growing up, changes, and finding ways to remember the good things in your life. And to share those memories with others. 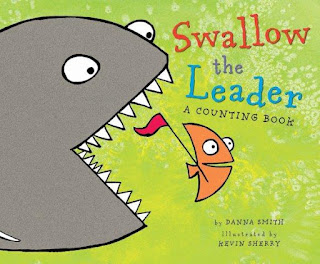 What happens if you let shark play follow-the-leader? This delightful, wickedly funny counting book starts with one fish, then another. It draws in denizens of the sea in rhyme:
Follow the leader
Play like I play
Pretend you are me.
Flap like a ray.

From one to 10 they collect followers… but then it becomes a game of swallow the leader as bigger fish gulps down the smaller until the biggest one of all – GULP!

But all is not lost – BURP!

Review copies provided by publishers.
Posted by Sue Heavenrich at 12:30 AM 1 comment:

Have you ever had a friend who was very different than you? These two books take us inside such friendships. 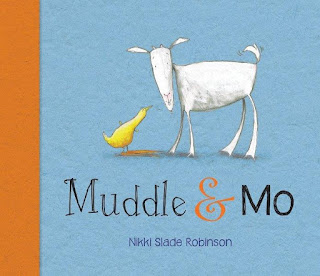 Mo and Muddle are best friends - but Muddle is a bit confused about their animal identity. That's because Mo has a "hairy beak" and he quacks funny.

But when they visit a goat farm, Muddle has an epiphany! Mo isn't a duck! Perhaps he, Muddle, is a goat?

What I like about this book: I like the gentle way that Mo helps Muddle sort out his duck identity. This is such a warm - and funny - story of differences, acceptance, and the sort of friendship that transcends all sorts of silliness. The illustrations are sweet, too. 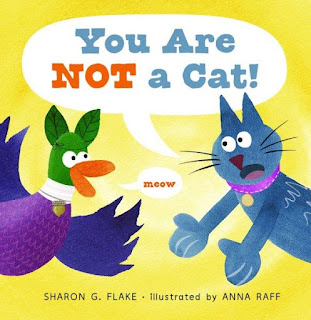 Duck thinks he's a cat. He wants to be a cat - no matter how many times Cat tells him he's a duck. So duck puts on cat ears and goes meowing about.

What I like about this book: When cat refuses to admit he's a cat, Duck decides he's a parrot. He could be a squirrel. Duck is casting about for his identity. To be honest, he's also irritating Cat with his constant pretending. I also like that the story is written completely in dialog.

Have you ever wanted to be someone - or something - else? Draw a picture or write a story about what happened/

What would you do if you woke up with wings? Or discovered you were a cat/dog/duck/goat... ? 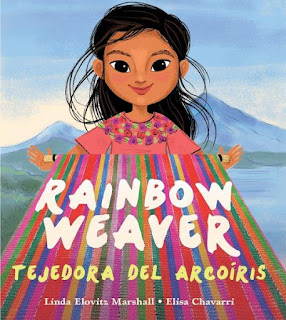 High in the mountains above Lake Atitlan, Ixchel watched her mother weave thread into fabric as beautiful as a rainbow.

When Ixchel asks if she can weave, Mama suggests she help count threads. But Ixchel wants to weave. She wants to help pay for her books and school.

What I like love about this book: Ixchel sets off to find her own weaving materials. She kicks aside the plastic bags that people have discarded on their way home from market, and gathers tall grasses to use on a loom she makes from sticks. When they don't work, she gathers bits of wool and twists it into yarn. Dissatisfied with that, she tries weaving with plastic bags - after all, they are everywhere! 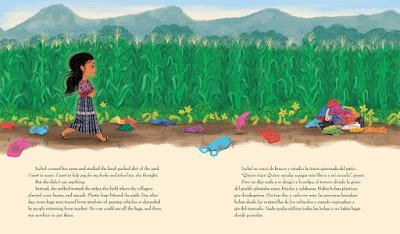 I love that author Linda Marshall traveled to Guatamala to meet weavers and learn how they recycle unwanted plastic into products that they sell in the market place. She wrote about that trip earlier this year here. In an author's note, Linda tells how she was inspired to write this book by a friend who sells the weavers' placemats, coasters, purses, and baskets. And I love that the endpapers resemble Mayan textiles. Oh, and did I say that the book is bilingual? Lo puedes leer en español.

Read how some people are turning plastic bags into mats for homeless people. They cut the bags into strips and crochet the strips into thick mats - it takes more than 500 bags for each mat!

Want to weave a plastic rug or mat of your own? All you need is a loom - here's how to make one out of cardboard. There are links to weaving techniques - all you need to supply are the warp strings and plastic bags.

Or try making a coiled basket or coaster. Here's how.

You can find out more about Linda and her books at her website.