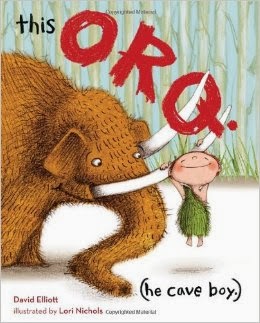 I love the way this book begins:
"This Orq.
He live in cave.
He carry club.
He cave boy."

Spare language that cuts right to the chase. You won't find adverbs floundering around on these pages; adjectives neither. On the other hand, that's what the pictures are for, right?

Orq has a pet. A woolly mammoth. It's a cute little guy, but it grows fast. And it's not housebroken. Worse yet, it smells, and Mother kicks it out of the cave.

Like any kid, Orq figures he can get his mother to love his pet mammoth if only mammoth can learn some tricks. If you've ever tried to impress a friend - or parent - with cute pet tricks, you already know that this is a sure way to have things run amok. In the end, the mammoth saves the day. I won't say how; suffice it to say it involves a saber-toothed tiger.

This is a great story for any kid who has brought a stray home and pleaded with parents to "let it stay".  And it's just plain fun to read. Pair it up with How to Wash a Woolly Mammoth for a double-dose of the sillies, or delve into some nonfiction for a study on ice age animals. Review copy from publisher.
Posted by Sue Heavenrich at 12:30 AM No comments:

A couple weeks ago I ran a give-away contest for The Girls of Gettysburg. Clara Bowman-Jahn is the lucky winter. Congratulations! 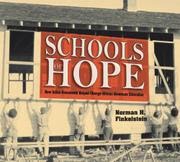 Jacket flap intro: "Julius Rosenwald's life was forever changed when he met Booker T. Washington, the well-known black educator. Washington introduced the president of Sears, Roebuck and Company to the deplorable conditions of African American schools in the South..."  and, as they say, the rest is history.

In the early 1900s, Rosenwald led Sears to become the largest retail establishment in the world. He became a wealthy man, but felt that people should share their wealth during their lifetime. In addition to charities, Rosenwald became involved in the education of blacks - from offering college fellowships to matching funding for building schools in communities for their children.

The schools that black children attended during that time, 1895 - 1914, were deplorable. Courts had held that education could be separate but equal - but there was little equal about the quality of the education black children received. Rosenwald was inspired by Booker T. Washington's book, Up from Slavery, and more than that, Washington's philosophy of self-help. When he got to meet the great man, they talked about the need for better schools.

The first school Rosenwald helped build was in Loachapoka, Alabama in 1913. It wasn't far from Tuskegee. Rosenwald donated $300 towards the cost of the school. The entire cost to build it was just under $950. Rosenwald insisted that communities be part of the building projects, raising funds and maintaining the schools so they had ownership. Families, both black and white, contributed.

In this book, Finkelstein weaves together a story about two men with vision - Washington and Rosenwald - and a time of great change. He also includes a neat section on how to build a school, from site selection to construction. He talks about fundraising, and the sacrifices families made to see their children educated towards a better future.

Where did the graduates from these schools end up? They were the parents of the generation who marched and sang and pushed this country towards civil rights. For more on schools and equality, check out reviews here and here.

Today we're joining the roundup over at the Nonfiction Monday blog where you'll find even more book reviews.  Review copy from publisher.

The Problem with NOT Being Scared of Monsters 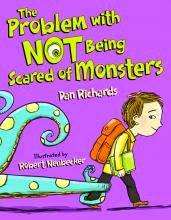 The Problem with NOT Being Scared of Monsters
by Dan Richards; illus. by Robert Neubecker
32 pages; ages 4-8
Boyds Mills Press, 2014

"The problem with NOT being scared of monsters is...
they think you're on of them." And that, it turns out, can be a real problem. Because they eat your cereal - and your homework, wear your favorite pajamas, and making walking home a real drag.

What I like about this book: It's fun - and funny. These monsters remind me of needy pets... or younger friends that just want to hang out with you all the time and do what you do. But not well-trained (eating homework) and with no boundaries (taking your favorite PJs). And then they keep you awake at night with their fears (no, I won't spoil it....).

The other thing I like (but Kirkus didn't) is how the kid foists this rambunctious horde of monsters off on his younger brother. Really! What little kid wouldn't want some friendly monsters to hang out with.... at least for awhile.

Dan Richards already has a follow-up book due out this fall. Monsters have issues, too, he says - like trying to make friends with children who just keep running away screaming.

Beyond the Book - there are so many great stories about Monsters, from the truly scary to the gregarious rumpus-makers in Where the Wild Things Are.

Go on a Monster Field Trip: head to the library and find as many monster books as you can. Take them home and study them. What kinds of monsters are there?

Now grab your sketchbook and take "field notes". Draw some of the different kinds of monsters from the books. Note important things such as: kinds of food they eat, the sort of habitat they live in, what kinds of games they play. If you'd rather, make a poster of "monster diversity" in books.

Make a Monster Mask from a large paper bag. Have fun! 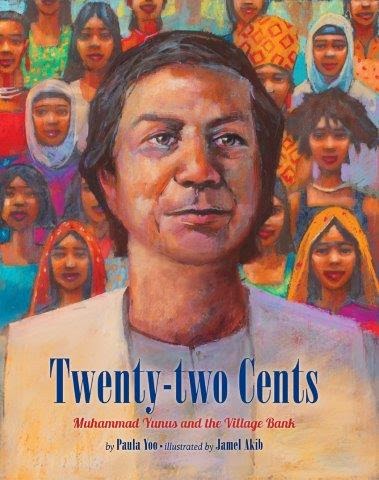 Muhammad Yunus grew up in the port city of Chittagong, back when it was still a part of India. He went to school, studied hard, joined the Boy Scouts and worked to help the less fortunate in his community. One of the things he noticed was how just a few coins could make a big difference to a family: it could buy rice to feed children, and allow women to buy raw materials from which to craft items for sale at the local markets.

Muhammad decided to study economics, thinking he could help make people's lives better. After graduating college, he came to the US to continue studying and began teaching. But his homeland was torn by war. He returned to what now was Bangladesh, to a country devastated by drought and famine as well as the war.

His life changed when he met a woman who needed 22-cents to buy materials for making the bamboo stools she sold. But she could not borrow the money from a bank because that amount was too small. Muhammad knew it would be easy to give her the money, but he wanted to find a better solution - a long-term solution that would help the women become economically self-sufficient. His idea: micro-lending. A village bank that would loan out small amounts to groups of people who would repay the loans as a group. The borrowers would begin with classes on banking and borrowing before they received their low-interest loans.

In this book, Paula Yoo tells the story of Muhammad, who was awarded the Nobel Peace Prize for his service to his community and the wider world. But it's more than a biography; she infuses each page with cultural context and brings the reader into a world where 22-cents can make the difference between feeding a family and starving. Put this one on your "must read" list!

Today we're joining the roundup over at the Nonfiction Monday blog where you'll find even more book reviews. Review copy from the author; won in a contest over at KidLit411 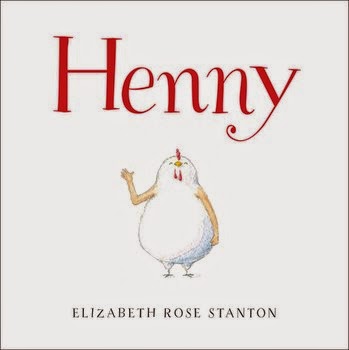 Henny was not a typical chicken. Henny was born with arms.

A typical chicken, we all know, has wings. But poor Henny. Instead of fluffy, feathery wings she had long skinny arms. Her mother loved her anyway.

What I like love about this book: the silliness of a chicken with arms - and the wonderful images Elizabeth Rose Stanton paints with her words. For example, when she runs, Henny's arms "flutter behind her like ribbons". You don't even need the illustration to see that picture!

I also like it that Stanton gives Henny some worries. For example: is she right-handed or left-handed? And what should she wear? 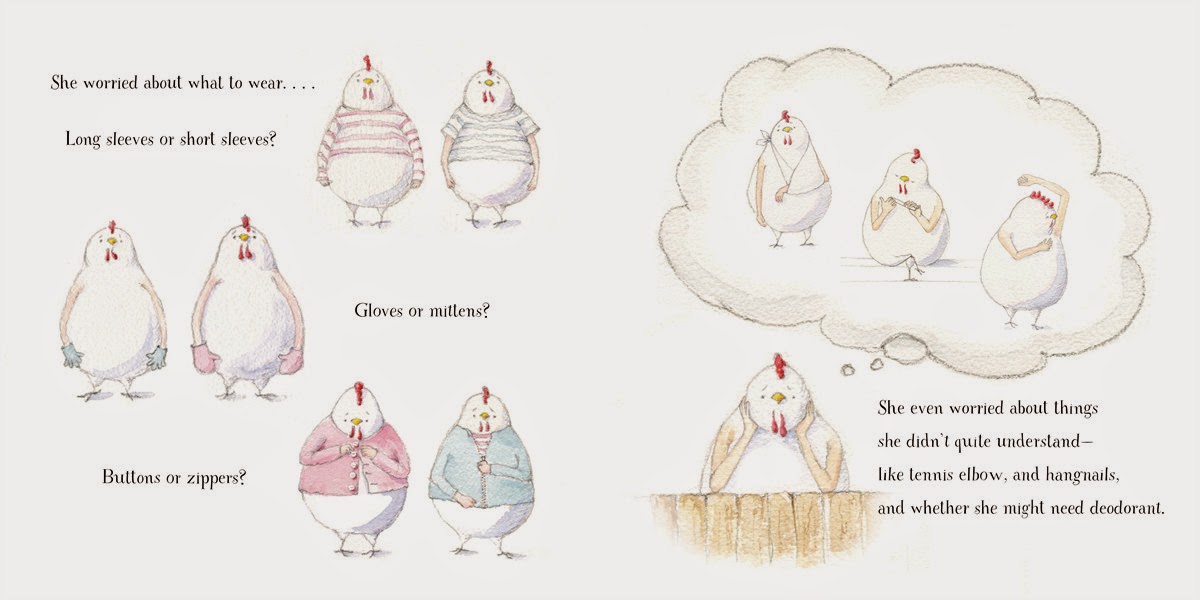 I like that Henny discovers so many things she can do with her arms - twiddle her thumbs, for example, or comb her comb. There's just one niggling worry: will she be able to fly? Nothing to fret over - Stanton's got that covered.

Beyond the Book: There is so much chicken silliness waiting to happen. Start with some chicken jokes. You may have heard why the chicken crossed the road, but do you know what you get when a chicken lays an egg on top of the barn roof? An Egg Roll! For more chicken jokes, go here - or make up your own.

Check out their eggs. You might know that some chickens lay brown eggs, but do you know that chickens also lay green and blue and pink eggs? Some lay dark brown eggs, some lay speckled eggs. The color depends on what breed of chicken is laying the eggs.

Do the Chicken Dance! The steps are easy: you make a beak with your hands and open-close it four times. Then you flap your wings four times, then wiggle your tail feathers four times, then clap four times. After a few repetitions, you circle round with a friend or two, or make up your own chickeny moves. Here's a video of some folks at the Children's Museum of Pittsburgh demonstrating how to dance.

The Girls of Gettysburg ~ and a give-away 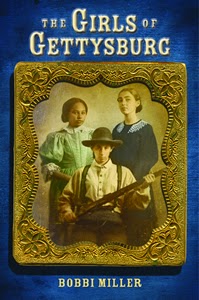 Take three girls from three very different backgrounds and put them in the center of the decisive battle in the Civil War - that's what Bobbi Miller does. There's Grace, a free black living in fear that soldiers will come north and capture her and her family as "runaway slaves". There's Tillie, the genteel daughter who believes the Rebels wouldn't dare come this far north. And there's Annie, who takes her brother's rifle and dons her father's woolen pants and cotton shirt and sells her service to replace a rich man's son.

Three girls. Three stories. One big battle - and everything changes. While this is historical fiction, it is based on situations and people who lived at that time. There were female soldiers who fought in the Civil War - some in the Battle of Gettysburg. They went undetected until they were carried off the battlefield, wounded or dead.

This book raises lots of questions, and might inspire young readers to look further than what they read in their history texts. Beyond that, it's plain good storytelling, and a fun read to boot.

Today we're hanging out at the Marvelous Middle-Grade Monday round-up. Drop by Shannon's blog to see what other reviewers are talking about. Review copy provided by publisher.

WIN a COPY of this book:  I like this book so much that I'd like to pass on my nearly-new copy to a history-loving reader. To get in the raffle, just do these two things:
1. leave a comment below, and
2. send an email to sueheaven[at]gmail[dot]com - or go to my profile and click on the email there. I will contact the winner by email next week.
caveat: You've got to have a US address to win the book.
Posted by Sue Heavenrich at 12:30 AM 12 comments: