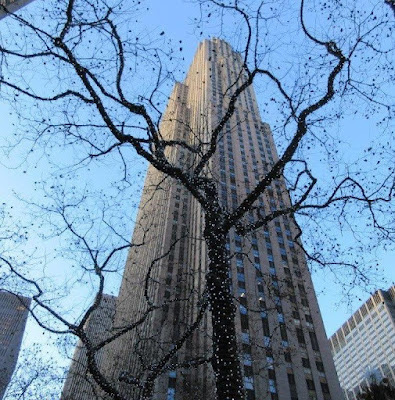 Fergus and Zeke and the 100th Day of School 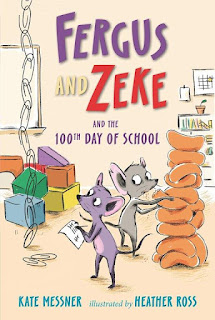 Fergus and Zeke and the 100th Day of School
by Kate Messner; illus. by Heather Ross
56 pages; ages 5-8
Candlewick, 2021
If you have not read any Fergus and Zeke books, then go get a couple. They are fun, fun, fun! This is the newest in the series, book #4 and it deals with math. In particular, the number 100.
For students in elementary school, 100 is a benchmark: the number of days you have been in school. Celebrated with snacks and parades and the creation of collections of 100 things. Zeke and Fergus, the class mice, want to participate in the excitement. Maybe they could run 100 miles on the mousewheel in the cage. It only takes a few minutes to figure that 100 miles is Too Long.
Maybe they should take a nap. It doesn't take any time at all to figure out that 100 seconds is Too Short. Maybe they could collect something... but 100 rocks are Too Heavy. And sometimes they begin counting or collecting only to discover that a box labeled "100" doesn't have 100 things in it! What's a mouse to do? You'll have to read the book to find out!

Thanks for dropping by today. On Monday we'll be hanging out at Marvelous Middle Grade Monday with other  bloggers. It's over at Greg Pattridge's blog, Always in the Middle, so hop over to see what other people are reading. Review copy provided by the publishers.
Posted by Sue Heavenrich at 1:00 AM 6 comments:

In the normal course of events, I request books to review. And so I was surprised to get a package from Scholastic. Had I asked for a book and forgotten about it? Nope. Inside was a young adult novel that I never would have looked at, much less cracked the covers of, had it not ended up in my mailbox. By mistake? By fate? Who knows.
Good thing it did, though, because I love a good story. Especially when it is grounded in fact and history. And doubly especially when it is written so well I just have to read another dozen (or 50) pages - even if it is one in the morning!
The opening chapter introduces Eva, standing on the deck of a ship and gazing at the sea before her and the city approaching. It’s August 1946 and she has left behind a world of burning rubble. She gathers her suitcase and that of Brigit, who does not speak. She gathers their papers, and checks to make sure her secret documents are safely hidden. Then, together they follow their guide down the gangplank and into immigration.
America is bright, and friendly – and Eva and Brigit are here ostensibly to begin a new life. Eva has come for justice. She has come to search for a Nazi physician responsible for conducting horrific medical experiments on prisoners in concentration camps. She has come to uncover secrets, with hope of bringing this person to justice before the US government recruits him for their own dark programs. She has come to dig for the truth about Project Bluebird.
Eva has also come to protect Brigit, and help her recover from the horrible suffering at the hands of soldiers. Chapters alternate between 1946 America and war-torn Germany. We see flashes of Eva’s childhood as a schoolgirl under the Nazi regime. Living in Germany, Eva knew no hardship (her household included servants). But as she begins uncovering clues, dark memories begin to surface and Eva wonders about her place in her family. And now she is being followed by mysterious men.
Eva eventually finds a job and covers the hospital expenses so that Brigit can get treatment. As Brigit regains her memories, we learn how the two girls are connected – and we see how their experiences translate into different views of the world they now find themselves in.
What I like about this book: Sharon Cameron paints a detailed picture of an American city post-war. Her characters are so three-dimensional they could walk out of the book and carry on a conversation with you. But what I really like is the backmatter. Sharon adds a dozen pages of well-researched material that provides historical context and perspective for her story and the era. It should come as no surprise that Germany was not the only one conducting research on human subjects during the war.
Posted by Sue Heavenrich at 1:00 AM 3 comments:

Off on Another Explorer Academy Adventure! 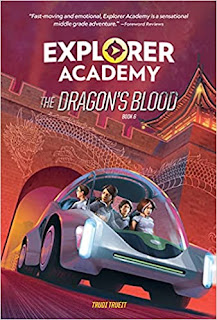 Explorer Academy: The Dragon's Blood (Book 6)
by Trudi Trueit
216 pages; ages 8-12
‎National Geographic Children’s Books, 2021
Cruz joins his best friends in another race-around-the-globe adventure in search of the next clue to his mom’s secret formula. This time we begin our adventures in a steamy rainforest in Borneo. Cruz Coronado and his friends are gathering information as part of a Bioblitz. They’re taking photos of animal and plant life they find, seeking the rarely seen. They find an orchid mantis that perfectly mimics the flower it’s named for, and pitcher plants that digest leaves instead of insects.
After they’ve had an opportunity to sharpen their observation skills, the students are sent into the Tasmanian wilderness on their real mission: searching for an animal thought to be extinct for the past hundred years. They deploy cool technology, such as the SHOT Bots (Soft Heliomorphic Observational Traveling Robots). The robots are designed to resemble stinging nettles so that the local wildlife won’t nibble on them.
But the creature they are searching for is so rare that the students wonder if they will ever see it. The book raises good questions, such as how do we protect species with small wild populations? It also highlights the importance of preserving biodiversity.
Of course, as the expedition unfolds, Cruz is drawn into searching for the missing pieces of his mother’s code. Clues point to the Terra Cotta army, an army of clay soldiers that were buried more than 2,000 years ago where the ancient capital of Xianyang once stood. Could the missing puzzle piece be there?
Meanwhile, it becomes clear that someone in the Academy is a spy. But who? and what does it have to do with emo-glasses and weaponized goo?
Like the other books in the series, the back matter explains the truth behind the fiction. You’ll meet an ocean explorer, an explorer who uses camera traps to document wildlife in a rainforest, and more who are involved in preserving the diversity of plant and animal life on our planet.
You can check out reviews of previous books in the series here, here, here, and here . Thanks for dropping by today. On Monday we'll be hanging out at Marvelous Middle Grade Monday with other  bloggers. It's over at Greg Pattridge's blog, Always in the Middle, so hop over to see what other people are reading. Review copy provided by Media Masters Publicity.
Posted by Sue Heavenrich at 1:00 AM 6 comments: