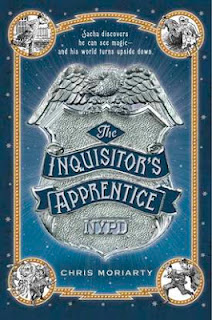 What’s a nice Jewish boy doing in a kid’s novel about magic, Wall Street wizards and robber barons? Chris Moriarty, who’s written a couple award-winning science fiction books for adults, wanted to write a story with a Jewish hero. This is the first of a new fantasy series set in an alternate-universe turn-of-the-century New York City.

In the early 1900’s New York was home to a diversity of immigrant neighborhoods.  Moriarty connects to that history, weaving together the growing union movement, the traditions and magic of many races, religions and cultures, and the disparities of the gilded age to create a new and vibrant whole.

Sacha, who’s managed to get through his bar mitzvah without showing an ounce of magical talent, suddenly finds himself apprenticed to the NYPD Inquisitors. Their mission is to stamp out the illegal use of magic – and it turns out that Sacha can see magic. After a harrowing test – “a five-hour multiple-choice ordeal held in an unheated basement” – Sacha is teamed up with
Lily Astral, daughter of one of the city’s richest Wall Street Wizards.

Their first case is to find out who is trying to kill Thomas Edison. Edison, it turns out, has invented a mechanical witch detector, giving every magic user in the city a motive for murder. But the clues lead Sacha back to the Lower East Side and his family’s neighborhood. This is not good for a kid whose family is involved in uniting the Industrial Witches of the World (aka the “Wobblies”).

A delicious read for kids who like a dash of authentic history with their fantasy. This review is part of Marvelous Middle Grade Monday. Review copy provided by publisher.
Posted by Sue Heavenrich at 3:30 AM No comments: 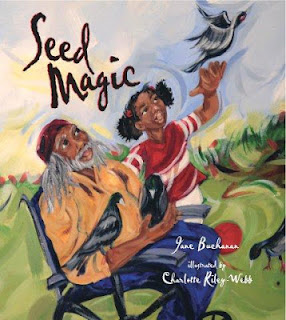 What happens when an old man gives a girl magic seeds? Well, if it’s the old man who feeds pigeons in the park, and the seeds are black-oil sunnies, you can be pretty sure that she’s not going to plant a garden. Especially in the cement-bound city. But it’s a garden that Rose wants. When she closes her eyes she sees “blue lupines, red geraniums, yellow sunflowers, like in her library books.”

Put these seeds outside your window, the birdman says. You’ll grow a garden. So Rose does; she knows that magic seeds can grow anywhere. But the garden she gets is full of feathers, not petals.

Beyond the book: Toss some bird seeds on your windowsill, grab your trusty field guide and see who comes to visit. OR pull some old wool socks on over your shoes and walk through a garden or weedy patch to see what sorts of seeds the wild flowers have produced.

This review is part of PPBF (perfect picture book Friday), an event in which bloggers share great picture books at Susanna Leonard Hill's site. She keeps an ever-growing list of Perfect Picture Books. Review copy provided by publisher.
Posted by Sue Heavenrich at 4:00 AM 1 comment: 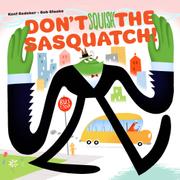 “Hello, Mr. Blobule! May I ride your bus?” Of course, says the bus driver. “I hope it doesn’t get too crowded,” says Mr. Sasquatch. “I do not like to get squished!” And so, with grinding of gears and a lurch, the story takes off with Sasquatch relaxing in a seat at the back of the bus.

But then Miss Elephant-Shark and Mr. Octo-Rhino and a host of other mixed-up creatures ask to ride the bus. “Of course you may ride my bus,” says the driver, “But please… Don’t squish the Sasquatch!” The bus goes up hills, down hills, on rolly curvy roads and the sasquatch gets squished with each new rider until, finally… KABLOOEY!

“Oh no! We squished the sasquatch!” What’s to be done but help patch him up with kisses and, at the end, a group hug which (you guessed) squishes the sasquatch! Poor guy – he can’t win.

What I like: the story starts before the title page, and posted beneath the bus stop sign a note: are we there yet? I love the way the words sing, the way the riders smoosh to the back as the bus goes up hills – even the loving but misguided group hug at the end. What a fun book to read aloud.

Review copy from a library.
Posted by Sue Heavenrich at 3:30 AM 1 comment: 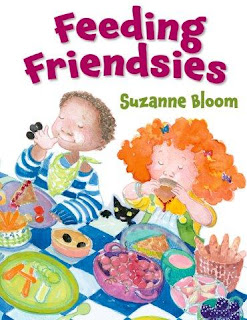 Not long after school started this year, I wrote an article for the local paper about getting healthy, locally-raised food onto the school lunch menu.

That’s not at all what this book’s about. Feeding Friendsies may be about feeding your friends, but it celebrates imagination and mud pies.

“Lolly made a lovely, crunchy lunch from stems and leaves with flowers on top,” writes Bloom. “Will she eat it? Oh no, no, no – she made it for the butterflies.”  A pair of Swallowtails, a Monarch, and a Red Admiral flutter above a salad piled high in a gardener’s straw hat.

When Nana finally calls Lolly and her friends to lunch, there’s a table loaded with carrot sticks, blueberries and blackberries, tomatoes fresh off the vine. Will they eat it? “Oh yes. Oh yes, yes, yes!”

I love the way Bloom brings the garden community to life - the butterflies and frogs and chickadees – even the puddle-water-soup-stirring kids. I love her bold watercolor paintings and the way she plays around with the title. This is just a plain fun book to read out loud!

themes: friendship, imaginative play
exploring beyond the book: Making mud pies is pretty straightforward; you just need good dirt. But here's some ideas for other things to do with mud.There's tons of things you can do with leaves - and now's a perfect time to collect leaves. Make a collage. Turn them into leaf fairies or animals. Rake them into a big pile for jumping. Mulch a garden. Try to move the way leaves do as they fall. Follow a falling leaf - how far does it travel? How long does it take a leaf to reach the ground?

This review is part of PPBF (perfect picture book Friday), an event in which bloggers share great picture books at Susanna Leonard Hill's site. She keeps an ever-growing list of Perfect Picture Books. Review copy provided by the publisher.
Posted by Sue Heavenrich at 4:00 AM 10 comments:

First Peas to the Table 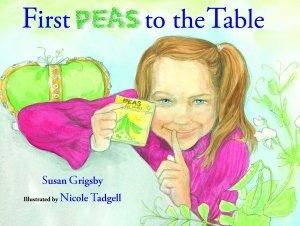 First Peas to the Table: How Thomas Jefferson Inspired a School Garden
by Susan Grigsby; illustrated by Nicole Tadgell
32 pages, ages 6 and up
Albert Whitman & Company, 2012

This book mixes gardening, Thomas Jefferson, and nurturing friendship into one satisfying story. Maya is in the same class as her best friend Shakayla, and they both want to win the "first peas to the table" contest. It's based on a challenge Thomas Jefferson used to present his neighbors: who could grow the earliest peas?

Shakayla raids the recycle closet and plants many kinds of peas. Maya scours the wisdom of TJ's gardening journals and decides to test a few of his tricks on just one variety. Then there's the ethical dilemma of whether to help her friend after a windstorm blows down the trellises.

This book is part science experiment, part competition, and a whole lot of fun to read - with notes about Jefferson's gardening at the back and tons of references for those of us who just gotta know more.


Review copy borrowed from a library.
Posted by Sue Heavenrich at 5:00 AM No comments: