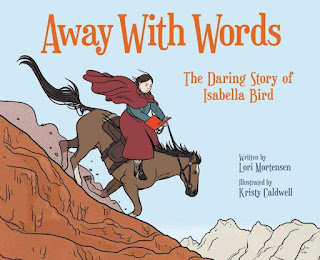 Away with Words: The Daring Story Of Isabella Bird
by Lori Mortensen; illus by Kristy Caldwell
36 pages; ages 6-10
Peachtree Publishing, 2019

Isabella Bird was like a wild vine stuck in a too-small pot. She needed more room. She had to get out. She had to explore.

But… Isabella suffered from illnesses. Maybe fresh air would do her good? Her father put her atop his horse and together they rode through the country side. Isabella dreamed of becoming an explorer. Later, she went on a sea voyage to Nova Scotia, hoping the sea air might help. She explored North America by steamboat, train, and horseback.

And when she returned home to England, she wrote about her adventures. Later, she set out again, climbing a volcano, hiking through Tibet … even causing consternation in a Chinese town. Each time she returned to share her adventures with readers eager to expand their horizons – even some readers who thought women should stay at home!

What I like about this book: I’m a sucker for adventure. Plus I’d read a couple of Isabella Bird’s books a few years ago. So it was fun to see some of her words on the pages of this picture book. Like other travelers of the time, Isabella kept a journal and sketched pictures. She noted distances traveled and wrote about the people she met.

I also like the way the illustrator portrayed Isabella and her travels, and the use of panels on the page. And there’s back matter: more about Isabella in an author’s note, a timeline of her travels, citations for quoted material, and a bibliography for armchair explorers who want to follow in Isabella’s footprints.

Be an explorer! Take a sketchbook and pens, colored pencils, and a water bottle (and maybe a snack) and head off on an adventure. It might be to a park you’ve never visited before, or the very back of your yard where tall grass grows and there might be tigers… Draw pictures of plants you discover. Talk to someone and write down what you learn. Have fun! 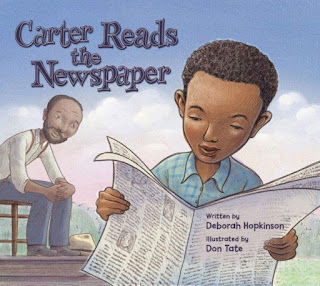 Each February we celebrate Black History Month. It’s a time to honor heroes like Harriet Tubman, Rosa Parks, and Martin Luther King, Jr. But there’s one hero we sometimes forget.

That hero is Carter G. Woodson. He didn’t help people escape from slavery. He didn’t protest in the streets or lead bus strikes. Instead, he changed the way people think about history. When told that Black people had no history, Carter was appalled. Of course they did! His parents, born into slavery, had shared their family stories. He listened to stories of Civil War veterans who had fought for their freedom. He read the newspapers and discovered more stories of black men and women – people who were left out of the history books.

So in 1926, Carter began his own fight: to include Black Americans in the history books. He established Negro History Week – which later became Black History Month.

What I like about this book: I always love true stories about empowerment and perseverance. I am drawn to heroes who fight for truth, freedom, and justice. And because I’m a journalist, I’m a bit partial to stories that show the power of information.

I like the back matter: resources for learning more, notes from the author and the illustrator, a list of Black leaders pictured throughout the book (with a snippet of bio facts), and a timeline of Carter Woodson’s life and accomplishments.

If you are looking ahead for books to feature this coming February, put this one on your list.

Newspapers provide the first draft of history. So challenge yourself to read the print edition of a local newspaper each week. I read mine at the library.

Ask your parents, grandparents, and great grandparents to share stories of when they were kids. Write your own newsy article about them. 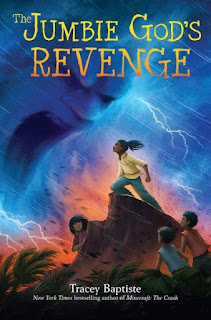 Corinne La Mer leapt from one tall coconut tree to another. Nothing but air surrounded her and there was only the sand and a few sharp rocks below.

By the end of the first paragraph, author Tracey Baptiste has grounded us so firmly into the setting that one can almost smell the salty breeze and feel the warmth of the Caribbean sun. Even if you haven’t read the first two books of the Jumbies series, you will feel at home in this story.

Corinne’s island is hit by a June storm – an early hurricane – and she knows in her bones that this is no ordinary storm. It must be the work of the Jumbies. If you don’t know what a jumbie is, just ask Tracey. They are tricksters from Caribbean folktales, she says, “a group of malevolent creatures who [are] hell bent on harming or at least tricking any human who dared to cross their path.”

So Corrinne sets off to find Mama D’Leau, the half-woman, half-snake who protects and rules the ocean. But Mama D’Leau is just as worried about the storm. Even worse, Mama D’Leau is frightened. What, Corinne wonders, would scare a jumbie?

When a second, more ferocious storm wrecks the island, and villagers flee to the mountain for safety, Corinne discovers that the storms are caused by the angry god, Huracan. Confronting this god is too large a task for a single girl. In addition to her friends, Corinne needs the help the jumbies – but can she trust them?

What I like about this book: I like the story of courage, the theme of community, the action-packed adventure. And the luscious language. Take a listen:

Everything about the white witch looked like it was near expiration: the sun-bleached pattern on her dress, the threadbare wrap that tied her head, the few drooping twists of short white hair that refused to be contained in her headwrap.

If I gave stars, I’d toss a basketful into the sky for this book. It’s a great read-aloud for the week before Halloween, or a cold, gray, rainy week – make a pot of hot cocoa, put on a CD of ocean waves lapping on the beach, turn on your best warm yellow lights, and enjoy a magical adventure. 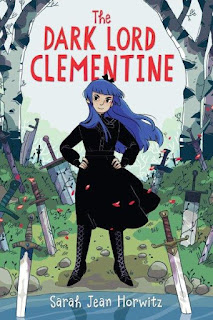 Last month I was checking out the pile of books in my To Be Reviewed basket… and was just about to put this in the “later” stack when I flipped it open to read the first sentence. Good thing I did, because… well, I’ll let the book speak for itself.

Clementine Morcerous awoke one morning to discover that her father had no nose.

And really! How could I put it down after that!

I love the premise: Clementine’s father, the Dark Lord, is wasting away. And if he disappears completely, she is the only one to carry on his name – and his life’s work. But Clementine isn’t nearly as dark as her dad. We can see this when she’s in the garden and there, away from the spiky, carnivorous, bloodsucking plants, she’s raising flowers. Dark Lords do NOT raise flowers!