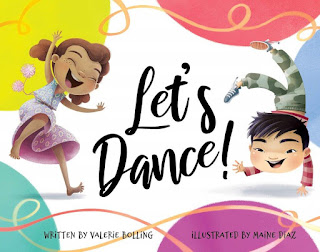 Twist, twirl, slide, jeté! This verb-filled, rhyming book highlights dance moves from around the world. From ballet to disco, readers will feel their toes tapping to the rhythm of the words. Watch out! When you put the book down, you’ll want to leap, glide, and two-step across the floor.

What I like about this book: The action! With only four to six words per spread, author Valerie Bolling infuses the pages with movement. She captures the rhythm of dance in the rhythm of the language. Illustrator Maine Diaz captures the vibrancy of the diversity of dance from around the world, from Cuba’s cha-cha to the flowing long-sleeve dance from China.

I also like that there is just the right amount of back matter: a couple of sentences explaining each of the ten styles of dance.

A couple weeks ago, I caught up with Valerie by phone. We chatted about writing and kids – because that’s what happens when two teachers start talking – and dance. She graciously answered Three Questions:

Sally: Where did your inspiration come from?

Valerie: My inspiration for writing comes from my nieces. When they were young, they would spend a week with me a couple times a year. I began exploring the idea of writing children’s books. I also noticed that if you put music on, children dance!

Sally: I love that the pages are filled with action, with verbs. Can you talk about how that happened?

Valerie: I wanted to have fun with words in the same way that people have fun with dance. I’ve always loved to play with words and rhyme, though I confess to consulting an occasional online rhyming dictionary.

I had a couple of dances in mind as I began writing wiggle hips, dip, dip… Some of the phrases were inspired by dances I remembered from a wedding. And I remembered watching a young man in a wheelchair; he lifted up the front wheels and did a combination of zig-zag moves.

I give a lot of credit to my editor who saw the potential in expanding the concept to include dances from around the world. She knew I wanted to include diversity – of dance and children, and her vision helped bring it to kids on a global level.

Sally: So, do you dance?

Valerie: Oh yes! Turn on the music and we’ll dance in the kitchen. I love to dance at weddings, on a cruise ship – wherever the music inspires me to tap my toes. The funny thing is, I never took a dance class until I went to college. Then I took an African dance class and learned the Kuku.

Create your own dance. All you need is some music and enough space to move. Turn on the radio, spin the platter, or stream a tune and bust some moves.

Thanks to Valerie for joining us today. You can find out more about her at her website here. Today we're joining Perfect Picture Book Friday, an event where bloggers share great picture books at Susanna Leonard Hill's website. Review copy provided by the publisher. 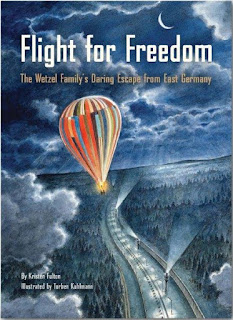 In the days when Germany was divided by a wall, life was very different.

On one side, children watch TV and eat pizza. On the other, children wear uniforms and – if they are lucky – get to eat a banana once a year. Peter lived on the wrong side. The side with scratchy uniforms, no cartoons, and no fruit. Then one night, he discovered a picture of a hot air balloon hidden beneath his parent’s mattress. His parents had a plan!

What I like about this book: Kristen shows us how Peter’s family scrimps and saves to buy materials to build a hot air balloon. She shows how they work secretly into the dark night. She shows the urgency –  they have one chance to try an escape – and the difficulty of both constructing the balloon and of choosing this path of resistance.

And there’s back matter galore! There’s an entire spread devoted to construction, materials, and engineering of the balloon. She’s included a page about escape attempts, and a note about how this story came about.

I met Kristen at a Highlights Foundation workshop about a year after she finished writing Flight for Freedom. I remember her dedication to finding the “golden nugget” of a story, and how she encouraged other writers to write the hard stuff and stick to the facts. I called her up last week and she graciously answered Three Questions:

Kristen: I was looking for my first nonfiction idea, you know, something to write about. I was perusing back issues of Time magazine and came upon a paragraph about a family escaping from East Germany in a hot air balloon. I immediately emailed Peter, using Google translator, and we corresponded. Eventually I traveled to Germany and talked to the family. I also visited the museum where the balloon is on display. Seeing the location and balloon really helped me feel the story in the way a character might feel it.

I also had an opportunity to see a section of the Berlin Wall on display at the Smithsonian. There were bits of graffiti on one side, and the other just had scratches and felt cold. That was the East German side. People couldn’t go near the wall because it was guarded by soldiers.

Sally: You finished Flight for Freedom back in 2012, and here we are, eight years later. Is that a long timeline for publishing?

Kristen: It is. The editor who initially acquired it ended up moving to another publisher. Fortunately, Ariel Richardson at Chronicle loved the original manuscript and that’s where the book found its home. The longest wait was for the illustrator; I really wanted Torben to do the artwork.

Sally: What advice do you have for writers?

Kristen: Do your research. When you think you have enough, keep on going. If you’re writing a picture book, do as much research as you think you’d need to write a chapter book – you want to have enough that you can choose what you put into the story.

Then focus. In this book I focused on just one family and the balloon. With picture books, less is more because the illustrator will fill in the other half of the story with their art.

And, very important, stay true to the facts. Don’t change anything and don’t make anything up. Even when the research isn’t going your way, don’t fudge the truth.

You can see the escape balloon and flimsy basket in this video, taken at the museum in Germany.

Read the Time article that inspired Kristen’s story here, and then another over at the Washington Post here.

Thank you for joining us today, Kristen. You can find out more about her books at her website.
We’ll join Perfect Picture Book Friday in a couple weeks -  once the Valentine story contest ends. PPBF is a gathering of bloggers who share their reviews of picture books at Susanna Leonard Hill's website. Review copy provided by the publisher. 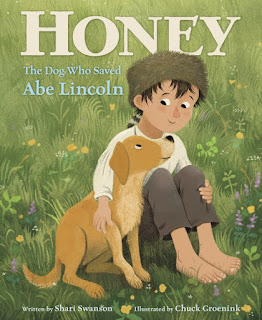 Young Abraham Lincoln was kneeling deep in the woods when three shrill blasts of a whistle cut through the quiet. His corn was ready at the mill, and he was late.

He was late because he was busy rescuing a frog. From a snake’s mouth. Later, we see him rescuing a dog with a broken leg. A dog who became his best friend and – eventually – rescued Abe!

What I like about this book: I have a soft spot for dog stories. And I love stories that reveal who our presidents were as children. This tale, remembered and shared by one of Lincoln’s childhood friends, shows a kind boy who grew up to be a compassionate president.

I like adventure tales, and this story includes one – when Abe went off exploring a cave and got into trouble. Good thing Honey was there to help.

And I like back matter. Author Shari Swanson includes a timeline of  Abe and “his animal encounters” plus an author’s note that provides more context for this particular slice-of-life tale.

Check out the curriculum resources for educators and activity packs for kids at Shari’s website.

Lincoln had many pets, from pigs to goats. He even pardoned a turkey meant for Thanksgiving dinner. Read more here. 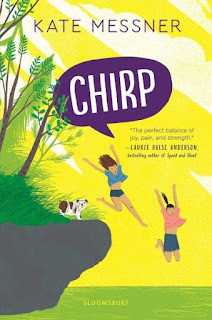 When Mia moves to Vermont the summer after seventh grade, she’s recovering from a broken arm – the result of a gymnastics accident. She’s trying to forget an ugly part of her life. And she becomes involved in a mystery: who is sabotaging grandma’s cricket farm?

At first, the sabotage sounds like coincidence, and mom alludes to grandma’s stroke. Maybe grandma is not up to running a cricket farm? But Mia thinks there’s nothing wrong with grandma, and is determined to help her out – in between attending a “warrior sports camp” and a “launch camp” for young entrepreneurs. While feeding and cleaning crickets, Mia learns that grandma is in debt. What can a kid do?

Mia talks to her friends, and they create a publicity campaign for the cricket farm. Meanwhile, Mia becomes more certain that someone is sabotaging the cricket farm. On top of that, Mia’s young cousin wants to take gymnastics. Mia wants to warn someone about the coach … but when she tries to talk to mom, her throat closes up.

Can Mia find the courage to talk to her parents about what happened in gymnastics? Will she find a way to capture the cricket farm saboteur? Will she ever regain strength in her arm so she can climb the wall? Inquiring readers want to know.

What I like love about this book: The characters have depth, the pacing is perfect, and it’s clear that Kate Messner has done her entomophagy research! Grandma’s cricket farm is grounded in reality and, with a quick internet search, you could probably find recipes for her flavored cricket snacks. Or at least the cookies…

I like that, in addition to abuse issues with Mia’s gymnastic coach, Kate shines a light on how we perceive – and treat – seniors. Both are family issues as well as social issues, and Kate creates an opportunity for readers to ponder how we interact with those we trust and those we love. Kate broaches tough subjects in a way that empowers both her characters and the reader.

Kate is a member of #STEAMTeam2020. You can find out more about her at her website.
Thanks for dropping by today. On Monday we'll be hanging out at Marvelous Middle Grade Monday with other  bloggers. It's over at Greg Pattridge's blog, Always in the Middle, so hop over to see what other people are reading. ARC provided by the publisher.
Posted by Sue Heavenrich at 12:30 AM 8 comments: