We're taking a summer break. As much as I'd like to head to the beach, the only thing nearby is a sandy bit of shore along a lake where seagulls wheel overhead. There are no waves, no hermit crabs, no tidepools. What we do have, though, is a library system filled with books about the beach. Books that can take us to the shore even if  we just spend summer dabbling toes in a wading pool, building sand castles in the sandbox, or swinging on a hammock strung beneath shady trees.

So I'm packing up my beach bag with library books and heading out to read... see you in September! 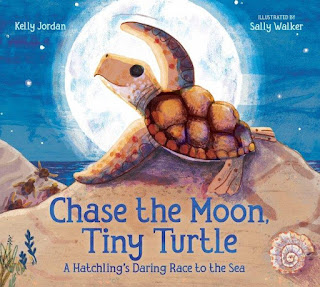 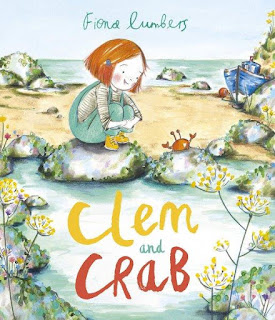 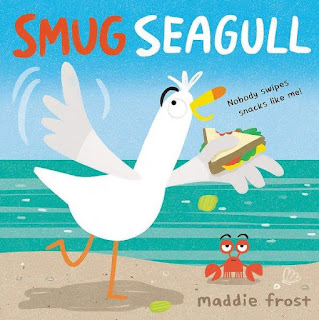 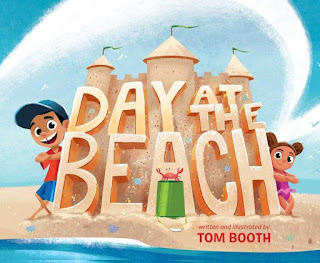 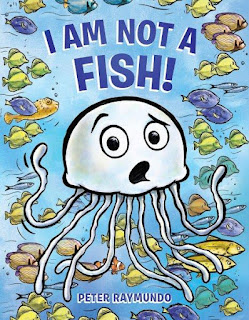 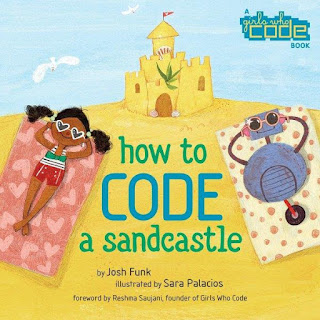 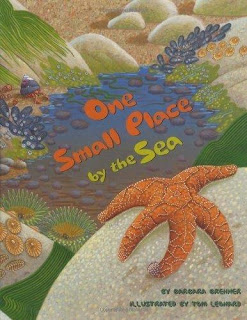 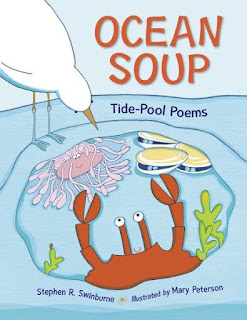 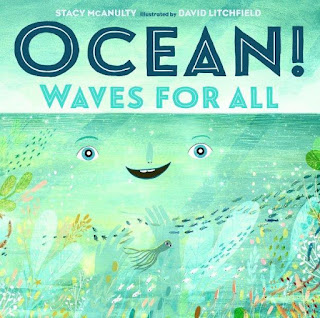 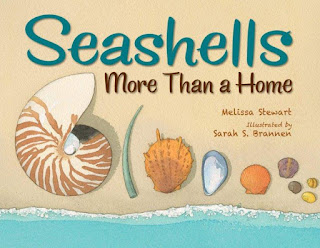 Posted by Sue Heavenrich at 1:00 AM 3 comments:

Two books about life under Hitler came out earlier this year. At the time, I was busy reading escapist stories of adventure, fantasy, and science fiction – you know, typical pandemic fare. But this spring I dug through my book basket and plucked these two out to read. 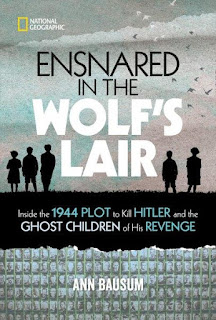 Ensnared in the Wolf's Lair: Inside the 1944 Plot to Kill Hitler and the Ghost Children of His Revenge
by Ann Bausum
‎144 pages; ages 10-14
National Geographic Kids, 2021
Anne Frank wasn’t the only one writing in her diary in 1944. Sometime during the summer of that year, “a 12-year-old German girl named Christa von Hofacker picked up her pen and began to write in her own diary.” Like Anne Frank, Christa wrote to try to make sense of her world. Her father was entangled in an assassination attempt against Hitler, deemed a traitor, and vanished into the Nazi criminal court system. Days later Gestapo agents took away her mother and older brother and sister. And then it was Christa’s turn to be uprooted – sent on a three-day, 500-mile journey to a youth retreat center. Now it was a detention center for children of German men and women who were resisting Hitler’s regime. The overseers took away family photos and were given new names. They weren’t allowed to enroll in local schools, attend church, or visit the nearby community. Instead they were hidden and denied outside contact.
In this book, Ann Bausum explores Hitler’s rise to power, the German resistance attempts to limit that power, and his demise. During the first part of the book, she shows how easy it was for Hitler to control the message and reality of what people heard and saw. His regime was built on lies and fears. But a few brave people, some in his government, worked to overthrow him. When that attempt failed, Hitler not only went after members of the resistance, but also their families and children.
A great mix of history, adventure, and insight into how a charismatic fascist leader can create a world of alternate facts. “…he connected with people on an emotional level that made it easy for them to dismiss logical counterarguments … his message was simple and it was compelling: You’ve been wronged, and I can make things right.” Serious, but essential reading for this time. 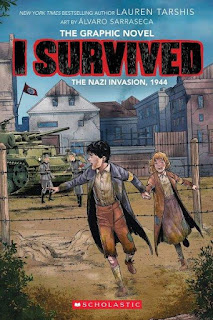 I Survived the Nazi Invasion, 1944 (graphic novel)
by Lauren Tarshis; illus. by Álvaro Sarraseca
160 pages; ages 8-12
Graphix (Scholastic), 2021
It’s been two months since the Nazis have taken papa away, and now Max and his sister, Zena, are on their own. They live in a Jewish ghetto in Poland, and are hungry. When Max sneaks under the fence to gather berries, he’s spotted by a guard and marched back into camp. When his sister is threatened, Max makes a lunge, a gun goes off, and chaos ensues – but Max and Zena run for the forest. They meet Jewish resistance fighters who take them to a safe camp, but soon grenades are exploding, planes are flying overhead, and soldiers are marching through the woods.
The story is told through comic panels, with text and dialog. It gets information and emotion across with a minimum of words, leaving plenty of room for a reader to imagine.

Thanks for dropping by today. On Monday we'll be hanging out at Marvelous Middle Grade Monday with other  bloggers. It's over at Greg Pattridge's blog, Always in the Middle, so hop over to see what other people are reading. Review copies provided by the publishers.
Posted by Sue Heavenrich at 1:00 AM 8 comments:

What if you Found a Thingity-Jig? 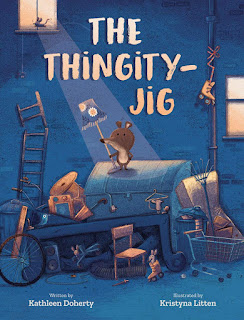 The Thingity-Jig
by Kathleen Doherty; illus. by Kristyna Litten
32 pages; ages 4-8
Peachtree, 2021
theme: mystery, fun, invention
One night, under the light of a silvery moon, all of Bear’s friends were deep asleep.
But not Bear. He wandered about tapping, poking, and sniffing things until he found a Thingity-Jig! It was bouncy! So Bear decides to take it home – but he needs something to pull it or drag it or roll it home. So he builds that thing, and then realizes he needs help lifting the Thingity-Jig onto his contraption to carry it home. But no one will help, so Bear builds a lifter-upper.
What I like about this book: I love the language! Smack. Wallop. Whack. That’s the sound of Bear building something. He clinks and clanks, fiddles and whittles… until he’s built a rolly thing, a lifter-upper thing, and other things with fun-to-say names that describe their function.
I love that Bear invents Rube-Goldberg-type things to help get the job done. I love that he runs into problems trying to get the Thingity-Jig back to his home. I love that Kathleen Doherty puts the best, most fun words to say into her text. I love that I actually have a Thingity-Jig at my house, and my kids used it in much the same way Bear does. 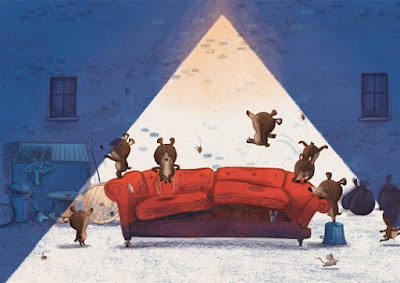 Beyond the Books:
Bear has to move a huge Thingity-Jig and has no one to help him. So he invents a way to move it. Design and – if you can – build your own thingity-jig mover. Raid the recycling bin for materials, put old wagons into use, think about pulleys and rope. But mostly, have fun!
Build a crazy contraption. Need ideas? Check out this video.
We’ll join Perfect Picture Book Friday once they resume. It’s a wonderful gathering where bloggers share great picture books at Susanna Leonard Hill's website. Review copy provided by the publisher.
Posted by Sue Heavenrich at 1:00 AM 2 comments:

Gardening is More Fun with Friends 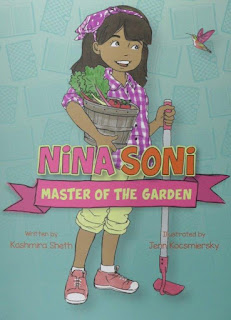 Nina Soni, Master of the Garden
by Kashmira Sheth; illus. by Jenn Kocsmiersky
192 pages; ages 7-10
‎Peachtree Publishing Company, 2021
It’s “take a daughter to work” day, and fourth-grader Nina is going to work with mom, who is a landscape architect. They are going to build a garden – raised beds. Little sister, Kavita has been working on a picture of a garden plan for a week. Nina, a list-maker, has yet to start.
One of the things I like in this book is that we see Nina’s lists – even when they’re in her head. Occasionally there are text-boxes, as though Nina is explaining something, such as what a word means, to her sister.
Before the first boards are nailed together, Nina is thinking how they can sell extra veggies to earn money. She’s even got a plan. It involves her friend, Jay and Kavita, but when is the right time to tell them?
The plants start growing and everything is going well until…
As a gardener currently engaged in hostilities with a woodchuck (he ate Every. Single. Sunflower!) I liked that author Kashmira Sheth does not spare her young gardeners from the realities of beasts and bugs. I love how she brings readers into Nina’s family life – I can almost smell the cheesy-methi parathas toasting in the kitchen. And I really like that Kashmira includes some Q&A at the back-of-the-book, where she talks about her inspiration and why it is important for readers to be exposed to diverse books written by people who share those diverse identities. Full disclosure: Kashmira was one of the instructors for the Highlights Foundation workshop on “writing chapter books” that I took last summer. Because of Covid-19 it was a remote class; I know we would have had many fun discussions about gardening around the lunch tables had it been in-person.

Thanks for dropping by today. On Monday we'll be hanging out at Marvelous Middle Grade Monday with other  bloggers. It's over at Greg Pattridge's blog, Always in the Middle, so hop over to see what other people are reading. Review copy provided by the publisher.
Posted by Sue Heavenrich at 1:00 AM 6 comments:

When it's Hot Enough to Fry an Egg on the Sidewalk... 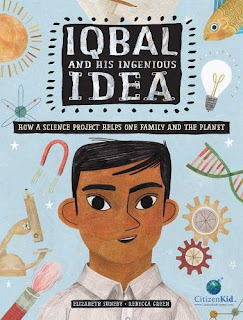 This book was published three years ago, but because of the heat wave in the northeast, it seems like a perfect pick for today. It got so hot in Oregon that roads buckled and Portland shut off the streetcars because heat was melting the cables. Scorching temperatures soared to 116 F in some places – hot enough to fry an egg on the sidewalk!
Iqbal and His Ingenious Idea: How a Science Project Helps One Family and the Planet
by Elizabeth Suneby; illus. by Rebecca Green
32 pages; ages 5-10
‎Kids Can Press, 2018
theme: STEM, sustainability, problem-solving
Iqbal lives in Bangladesh and it’s the monsoon, when “gusts of rain whip across your face and make you squint your eyes.” At home, Iqbal’s mother cooks the meals over an indoor fire. The smoke irritates her lungs, causing her and the baby to cough.
Iqbal wants to win the prize at the science fair so he can use the prize money to buy his mother a gas cookstove. He’s got a month to come up for a project that fits with the theme of sustainability.
What I like about this book: This is a fun story to read, while broaching a serious topic at the same time. We see Iqbal trying to come up with ideas. He sketches gadgets with gears, he conceives of contraptions, he dreams of devices. Could he build a smokeless cooker? With help from his teacher, they get ideas from the internet, and Iqbal designs a solar cooker from things most people have in his village: broken umbrellas. He lines his umbrella with foil, borrows a soot-blackened cookpot, and is ready to test his stove. All he needs is a sunny day to test it.
Beyond the Books:
Can you really fry an egg on the sidewalk? Probably not. Eggs need to reach a temperature of 158 F to cook through – hard to do on a white surface. A better idea would be to fry an egg on the hood of a car sitting under the hot sun (remember: eggs will run, and car hoods are curved). One Arizona girl had a brilliant idea: put the greenhouse effect to use and fry an egg inside a car on a hot day. You can watch her video here. It’s also a good reminder of why you don’t leave pets – or people – inside cars.
Make your own solar cooker. Here’s how to turn a pizza box into a solar oven, and here’s how to turn any kind of box into a cooker.  You can also use an old umbrella and lots of shiny foil, like Iqbal. A good test is to use your oven to make s’mores.
We’ll join Perfect Picture Book Friday once they resume. It’s a wonderful gathering where bloggers share great picture books at Susanna Leonard Hill's website. Review copy found on the library shelves.
Posted by Sue Heavenrich at 1:00 AM No comments: