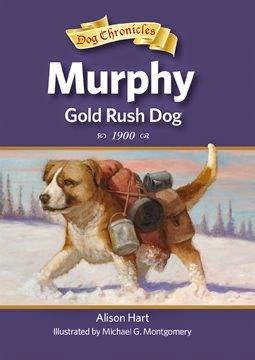 I am a sucker for books about dogs, horses, pigs and spiders - even fleas (drop by Monday and all will be clear). I am especially drawn in to the stories when they're told first-person from the dog (or horse, etc) point-of-view. And that's exactly what Alison Hart does in this book, second in the "Dog Chronicles" series.

Murphy is an unlikely hero - mud-covered, paws bleeding from mushing across the ice-encrusted snow. It's early June when we meet him and his harness mates, racing from Dawson to Nome for the sake of staking a claim ahead of others on that same trail.

"When I was young I had known a gentle touch, a heaping bowl, and a loving home," Murphy reflects. But then he was sold as a sled dog to a hard-driving gold digging schemer who would stop at nothing to get rich. Now Murphy is caught in a life with no kind words, no straw bed, and never enough food to fill his stomach. Until....


... he is befriended by Sally, whose mama is worried that Murphy is a mud-covered, flea-bitten mutt (which he is until Sally washes him) who will eat them out of house and home. Murphy cleans up nice, and turns out to be a protector and friend.

This is a book of adventure, filled with villains, bears, an avalanche, and lots of gold dust. It is also steeped in history, and Hart appends notes at the end which sort fact from fiction. There is no real Carlick; he is a character drawn from the many claim jumpers and cheats that populated Alaska's gold fields. But the judge - and the scandal involving the Alaska Gold Mining Company - is real. And so are the techniques Hart's sourdoughs used to separate gold from the rock, and life in Nome at the turn of the century. Now, a hundred years later and into a brand-new millennium, Nome is experiencing a new "gold rush". Which makes this book both timely and timeless.

The sourdoughs weren't the only ones struck by "gold fever". In my interview with Hart last year, she said she "struck gold" when she dug up a book about the Alaskan Gold Rush that contained letters and photos from Nome. Stuff like that is a real "treasure” for a writer.... and, struck by her own gold fever, Hart dove into research that resulted in Murphy.

Hart also includes a bibliography and list of books so that readers who get bitten by the gold bug can delve deeper.


We're the last stop on this gold rush blog tour. If you missed any stops on the way, here's the schedule so you can catch up with earlier posts:

Book Giveaway. To stake your claim for a copy of this book just follow these rules:
1. leave a comment
2. then email me at sueheaven[at]gmail[dot]com -  so I have a way to contact you if you are the winner (or go to my profile and click on the email).
3. the giveaway is limited to residents in the US.
Get your comments in by Wednesday (Oct 29).  Review copy provided by the publisher.
Posted by Sue Heavenrich at 1:00 AM