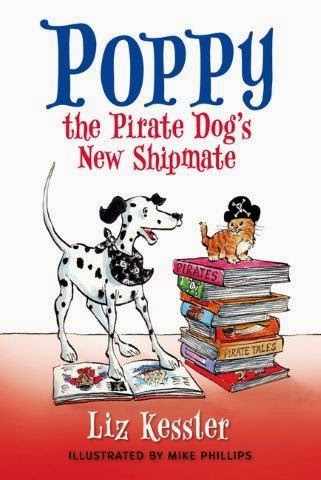 Ahoy, mateys! Welcome to the second installment in the tales of Poppy the Pirate Dog. This be a chapter book, with plenty of fine illustrations and very little actual pirate lore.

There are five short chapters. The first begins like this: "Poppy the Pirate Dog was bored. She was home alone. Again."

After a fun-filled summer featuring pirate ships and buried treasure, her people are heading back to school. As if that weren't enough, they're busy with after-school sports too!

Poppy needs a friend - and her people come up with a marvelous idea: get her a shipmate so she won't be so lonely. But what Poppy thinks an ideal shipmate is and what her family thinks - well, let's just say that those two ideas don't share anything in common.

George, the new shipmate, is cute. George gets to lie on the bed. George finds Poppy's buried treasure. George is a... cat!

But when George gets in trouble, Poppy walks the plank to rescue her new pain-in-the-tucas shipmate. What fun! This book deserves a staaarrrggghhh!

There is no Perfect Picture Book Friday round-up today, but there is a wonderful Halloweensie story contest happening over at Susanna Leonard Hill's blog. So head on over and read a few stories.
Review copy provided by publisher.
Posted by Sue Heavenrich at 12:30 AM