Before I get into today's review, I have a winner to announce! Way back a week or so ago I hosted the last stop on the blog tour for Murphy, Gold Rush Dog. The lucky winner (chosen at random by pulling names from an empty chocolate tin) is Evelyn. Congratulations. And now for something completely different... 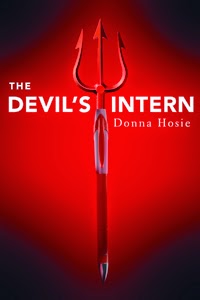 A bit late for Day of the Dead, but still in keeping with the season.... this is a fun, snarky, satirical look at life - and life after death. Or, as the folks in Hell call it: death.

How can you pass up a story that begins:


Mitchell Johnson, seventeen years old, was hit by a bus. An inglorious end to his budding career as a rock star - or whatever he might have become. And that, he points out, is the problem: he never got a chance to live. If he could go back in time, he would change whatever it was that caused him to walk in front of that bus. He would cheat death and live to be an old man.Instead, he's in Hell, and working as the Devil's intern - which is actually a pretty cushy job considering the alternatives. He could be working in the kitchens or on any of the other levels.

Turns out, Hell is awash in bureaucratic red tape. And they are up to their knees in forms. Worst of all, the heating bills are breaking the budget and they are strapped for cash. Luckily the Devil has a credit card and a special arrangement with brokers on Wall Street: they get special privileges once they're dead in return for low-interest loans.

When Mitchell learns there is a special watch-like device that will allow people to travel through time, he decides to revisit his death site and straighten things out. But he needs a buddy to go along, because using the viciseometer - that's what the time device is called - has side effects that might strand you somewhere you don't want to be. Instead of one buddy, though, Mitchell ends up traveling with three friends and all - er, things get complicated.

Full disclosure: I liked the TV series "Dead like Me". I also like Gina Damico's trilogy about young reapers: Croak, Scorch, and Rogue. And the idea of civil servants buried in piles of paper work in the governmental offices of Hell tickles my funny bone. Review copy provided by publisher.