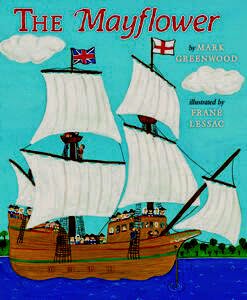 On September 6, 1620, one hundred and two passengers began their journey on the Mayflower. "The Pilgrims didn't know what to expect when they reached their destination," writes Greenwood. "Before them, only explorers and fishermen had undertaken such a dangerous voyage."

This book is a straightforward telling of the voyage to a new world and answers important questions about what they ate and how they spent their time aboard ship. There's an exciting rescue at sea and a few tense moments when a main beam buckles and water pours in.

What sets this book apart from other tales about the first Thanksgiving is the back matter. There's a timeline from 1620 to 1941, when President Franklin D. Roosevelt signed a bill to set aside the fourth Thursday in November as Thanksgiving. There's also a long list of books and other resources for curious future pilgrims. Review copy provided by publisher.
Posted by Sue Heavenrich at 1:00 AM