What if you had so many books you had to build a library to hold them? That's what Thomas Jefferson did... the Library of Congress. 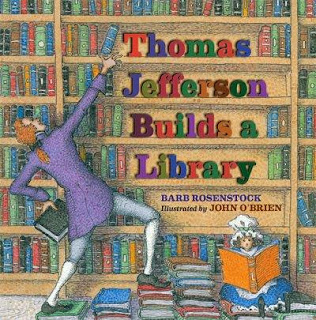 From the title page illustration (TJ constructing a library using books) to the end notes, this book is chock-full of fun information. There are quotes from Thomas Jefferson: "I cannot live without books" (1815), and cool facts. Did you know that in Jefferson's time, books were commonly sold unbound? People took the pages to a bookbinder who covered the book and stitched it all together.

Barb Rosenstock pulls us into the story from the get-go. Thomas Jefferson learned to read early, and never stopped. He "gobbled books the way a starving man eats," writes Rosenstock. By the age of six he'd read every book in his father's library. So when he started collecting things... it seems only natural he'd collect books.

How appropriate, then, for this week's Nonfiction Monday to be hosted by Abby the Librarian. Bloggers who love children's nonfiction will share the cool books they are reading over at her site. Review copy provided by publisher.
Posted by Sue Heavenrich at 12:30 AM