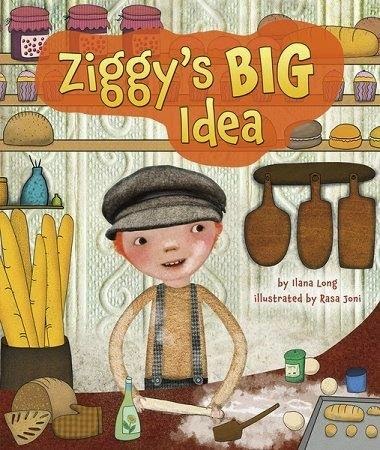 Morning is Ziggy's favorite time to think up new ideas. He invented a Ziggyball - square, so it won't roll into the street. He invented stilts for his teacher - because the Rebbe is so short. But... they didn't work out so well.

Then one morning Ziggy comes up with an idea for the baker. See, the baker makes wonderful buns, but sometimes they're not quite done in the middle. And Ziggy thinks he's got the solution: get rid of the center.

OK - so maybe this isn't exactly how the bagel came to be, but this is such a fun story, wonderfully illustrated, complete with a bagel recipe at the back an a cool fact about bagels in space.

If you've seen other flavors, leave a comment and I'll add them to the list.
And here's the book trailer for Ziggy's Big Idea