Shooting at the Stars ~ the Christmas Truce of 1914 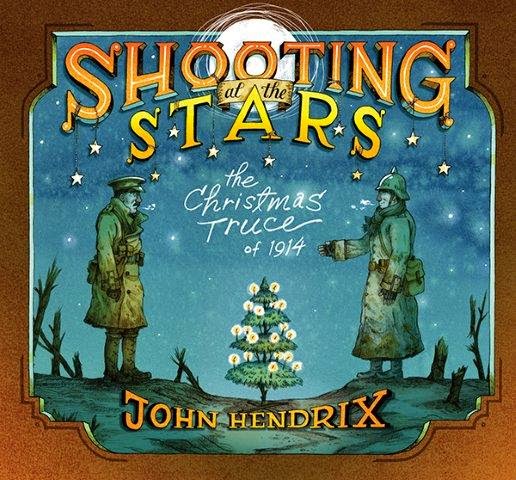 "One hundred years ago, a horrible war began. It was the biggest conflict the world had ever seen."

In this fictionalized retelling, John Hendrix imagines the Christmas Truce of 1914 told from the perspective of a young British soldier, Charlie. The story is based on letters and interviews with real soldiers who were in the trenches during that period of time. But Hendrix tells it through a letter Charlie writes to his mother. Charlie tells about how close they are to the Germans - only 30 paces separated the trenches between the warring sides. He tells about the mud, and how hard it is to keep his feet dry. And he tells about the miracle of that first Christmas eve on the front, when Germans and British soldiers put down their weapons for a day of peace.

What I like about this book: though fiction, it sticks very close to the letters and stories told by soldiers from that night. It underscores the things both sides had in common: their songs, their faith, their deep love of Christmas, and how sharing chocolate and a good game of football (or soccer, as we call it) can bring people together. The story always leaves me wondering how they could go back to shooting at each other the next day, but Hendrix takes care of that. Soldiers follow the orders, but they just can't seem to shoot straight...

I also like the author's note at the back, along with a photo from the Christmas Truce of 1914 and a glossary.

Beyond the Book: For kids who just can't get enough history, head over to history.com for more info about the Christmas Truce. If you're wondering whether they really did play soccer, check out this letter written from the trenches in France by a British general. H documents the troops laying aside their arms, exchanging gifts, and playing that oft-cited Christmas game.

Listen to John McCutcheon sing Christmas in the Trenches and check out this bit of footage from the film, Oh! What a Lovely War.

Play a game of winter soccer. Invite friends and neighbors over for a post-Christmas dinner game of soccer, even if it means stomping down the snow so you can kick a ball. Don't be too serious about choosing teams or how many players are on a side. If you don't have a soccer ball, don't worry. Neither did the soldiers in WWI. They used empty tins, but you can wad up all that used wrapping paper and tape it and tie it into a ball.

Then, when you're cold and wet, make some hot cocoa. The soldiers shared their chocolate bars, but you can have your own cup. Sharing marshmallows is optional.