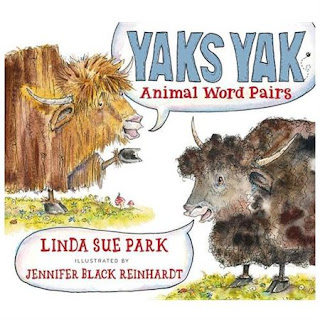 This is a book crammed with wordplay: animals and the things they might do, if they lived in Linda Sue Park's universe. Yaks would sit around talking. Bugs would annoy their buggy friends. And flounders (a flat kind of fish) would flail helplessly because that's another definition of "flounder".

It's a simple structure - noun + verb - made more fun because both noun and verb are the same word.

What I like: The improbability of it. The imaginative illustrations of steers in bumper cars "steering" and crows boasting (crowing) about their accomplishments. And that there's a glossary that defines where the animals' names came from and the meaning of the "action" word. For example: a "kid" is a child, but "kid" also means to joke.