Space Boy and the Space Pirate 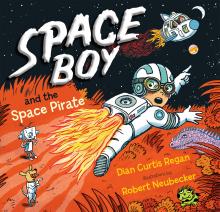 Last year we met Space Boy when he blasted off to rescue a cat. Now he's off on another adventure - to rescue his cousin, Sasha, who's been kidnapped by a space pirate.

"Wake up!" he yells to his trusty crew, and they blast off, headed to Planet Zorg. Where they find the evil space pirate who is forcing Sasha to ... play dolls? Space Boy tries to negotiate a hostage release but the pirate steals his space ship, leaving him stranded. Will he ever get back to earth? Will he be able to rescue his cousin? Will he be late for dinner?

This adventure story, accompanied by comic book-style artwork, celebrates the power of pretend play. You may want to have some extra boxes hanging around in case your young space cadet decides to build a ship of her own.

Check out the space-related activities here. Review copy provided by publisher.
Posted by Sue Heavenrich at 12:30 AM