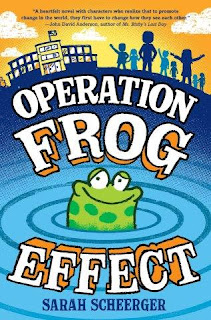 Some books have a prologue. This book starts its story on the jacket cover with a letter to the reader from some kids:

Hi--
It's us, Ms. Graham's class. We didn't mean to mess things up. But we did. We took things too far, and now Ms. Graham is in trouble--for something we did. We made a mistake. The question is, can we fix it? Ms. Graham taught us that we get to choose the kind of people we want to be and that a single act can create ripples. So get ready, world--we're about to make some ripples.
Sincerely,
Kayley, Kai, Henry, Aviva, Cecilia, Blake, Sharon, Emily (and Kermit, class frog)

The thing is – everyone makes mistakes. This book explores what happens when your mistakes hurt someone else. It begins with a rescued frog who becomes a resident in Ms. Graham’s fifth grade classroom. And is told through the perspectives of eight students through the pages of their journals:


It’s fifth grade and for some kids, the academic pressure is on - which leads to stealing (or borrowing) ideas for the egg drop challenge. There are lunch table exclusions (and inclusions), making new friends (and worrying whether that means you have to leave old friends behind), and desk-top letter boxes. There are group projects that sometimes go sideways – which is how the gang of eight end up in hot water.

Mostly, fifth grade is about learning who you are – and the kids in Ms. Graham’s class get an A for effort. This book came out near the beginning of the year, but makes a perfect summer read.

Thanks for dropping by today. On Monday we'll be hanging out at Marvelous Middle Grade Monday with other  bloggers. It's over at Greg Pattridge's blog, Always in the Middle, so hop over to see what other people are reading. Reviewed a copy from my library system
Posted by Sue Heavenrich at 12:30 AM