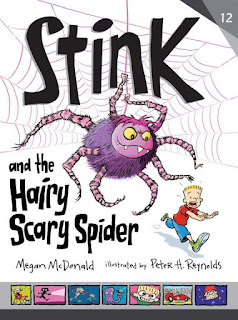 If you have not yet met Stink, then you’re in for a treat. This paper-folding origami whiz seems like a normal second-grader, and he just happens to be Judy Moody’s brother. In this tale, Stink discovers a pink-toed tarantula – which would be cool, except he is afraid of spiders. Especially giant hairy scary spiders! When his best buddy, Webster talks him into rescuing the spider – it’s a lost pet – Stink is forced to face his fear.

What I like about this book is that author Megan McDonald has packed as many cool spider facts in it as she can. For example, did you know that one acre of land can have up to one million spiders? In case you’re wondering, an acre is less than the area of a football field. You can get a good idea for its size by pacing off a rectangle 66 feet on one side by 660 feet.

And if spiders ate people (which they don’t), all the spiders in the world could finish off all the humans populating Earth in a single year.

I also like McDonald’s use of similes. For example, Stink is as quiet “as a trapdoor spider waiting to catch a beetle.” There’s also a “meet the spider” page and (because you know I love it) Back Matter! This time you get to learn how to fold an origami critter… not a spider, though, because origami spiders are hard!

Stink isn’t the only one scared of spiders. Entomologists, scientists who study insects, are also afraid of spiders. You can read the study – plus find out what else entomologists are afraid of – here (free pdf of study).

Thanks for dropping by today. On Monday we'll be hanging out at Marvelous Middle Grade Monday with other  bloggers. It's over at Greg Pattridge's blog, Always in the Middle, so hop over to see what other people are reading. ARC provided by the publisher.