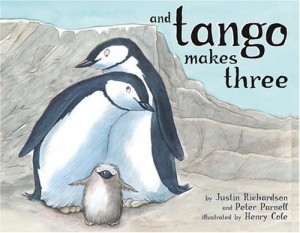 Every day, families of all kinds visit the animals that live in New York’s Central Park Zoo. But children and their parents aren’t the only families at the zoo.

“There are red panda bear families,” write Justin Richardson and Peter Parnell. “There are monkey dads and monkey moms raising noisy monkey babies. There are toad families, and toucan families, and cotton-top tamarin families too.”

The most unusual family, though, is a penguin family: Roy, Silo and a baby named Tango. Roy and Silo are male Chinstrap penguins who prefer each others company. During breeding season they copied other penguin pairs, building a nest of stones. They even sat on an egg-shaped rock…but nothing happened.

So in 2000, when a penguin pair had one too many eggs to care for, the zookeeper brought the extra egg to Roy and Silo’s nest. When the chick hatched, Roy and Silo fed her. They taught her their special family song (to sing when she was hungry) and kept her warm at night.

I like the tender story about the affection, pair bonding and parenting of these two tuxedo-clad guys; apparently same-sex couples aren’t all that unusual in animals. But such relationships tend to be short term and soon after the book was published, Roy and Silo’s relationship dissolved. Silo, it seems, lost his heart to a female from California.