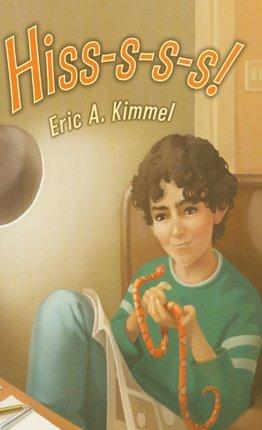 Hiss-s-s-s!
By Eric A. Kimmel
160 pages, ages 8-12
Holiday House, 2012
Omar wants a snake. It’s a perfect pet: it’s clean, it doesn’t shed, and it doesn’t take up much room. There’s only one problem: Omar’s mom is deathly afraid of snakes. Still, after some negotiating and signing his name to an iron-clad contract (the snake will NOT escape!), Omar’s mom gives her approval.

It won’t be a python or an anaconda… Omar’s done his research and knows he wants something smallish and friendly. A corn snake.Once mom agrees, he needs to figure out where to keep his snake (more research) and where to get it. While some may feel the story gets bogged down in the research, I found it intriguing – maybe because I live with a guy who raised snakes when he was a kid… Soon enough we’re introduced to the Snake Dude, get a quick lesson in snake breeding, and I learn something new- corn snakes come in many colors and patterns.

Omar takes his snake, "Arrow", home and all goes well. At least until mom discovers baby mice in her clean kitchen and Arrow escapes. The tale picks up its pace as Omar races to find his snake before it finds his mom.

Keeping the great snake escape a secret is made harder by the never-ending questions from his curious little sister. But with the help of his friend, Omar comes up with some snake-hunting strategies. His mom does get a bit suspicious when Omar offers to vacuum the house – but accepts his explanation that it’s so she can give his buddy a painting lesson.

Just when Omar is ready to come clean and confess that Arrow has escaped, the snake makes an unexpected – and nearly tragic appearance. Who knew a harmless herp could cause such trouble?

This is part of Marvelous Middle-Grade Monday! Noting the snake science incorporated into the book, the National Science Teacher's Association listed Hiss-s-s-s! as an Outstanding Science Trade Book for 2013. Check out more cool reviews for kids here. Review copy from publisher.