Alice Coachman Had a Dream 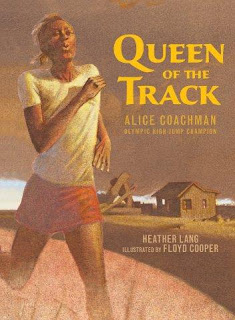 Queen of the Track: Alice Coachman, Olympic High-Jump Champion
By Heather Lang; illus. by Floyd Cooper
40 pages, ages 5 and up
Boyds Mills Press, 2012
“Alice Coachman was born to run and jump,” writes Heather Lang. “…Alice skipped through the fields. She hopped on rocks, She vaulted over anything that got in her way.” But in the 1930’s, running and jumping weren’t considered very ladylike. And besides, Alice had lots of chores to do after school. But she found time to run.

Alice grew up in the South at a time when black people didn’t have the same rights as white people. There were no parks or gyms or tracks where Alice could practice running and jumping – but she didn’t let that stop her. She ran barefoot on dirt roads. She collected sticks and tied rags together to make her own high jumps. Because Alice had a dream… she wanted to run in the Olympics.

With a record-breaking leap, Alice became the first African-American woman to win an Olympic gold medal. This is her story – the story of a girl who dreamed of running and who never took her eyes off the prize. Alice once told a New York Times reporter, “When the going gets tough and you feel like throwing your hands in the air, listen to that voice that tells you, ‘Keep going. Hang in there.’ Guts and determination will pull you through.”

Check out photos of Alice here. And check out other books that celebrate nonfiction at Nonfiction Monday, hosted this week by TheLibrariYAn. Review copy provided by the publisher.