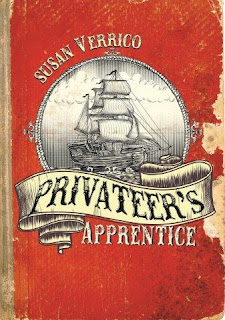 It is the Year of Our Lord 1713 in Charles Towne, the Carolina Territory, and Jameson Cooper is in jail. He thought, when he grew up, he'd take on his father's job as recorder of deeds and printer. But when his mother dies of smallpox, followed three weeks later by his father, Jameson is left homeless. He is accused of stealing and sentenced to be auctioned off to the highest bidder.

While running an errand for his new master, Jameson is knocked unconscious, kidnapped, and pressed into service aboard the "Destiny", serving Queen Anne. His new master is the fearsome Captain Attack Jack who, in addition to liberating gold and jewels from Spanish galleons, seeks to claim new territories for England. Jameson not only proves his worth as a sailor, but also finds new uses for his artistic skills in mapping the New World.

Susan Verrico, who penned this whopping good adventure on the high seas, is passionate about history. She graciously answered Three Questions (and a half) about her book.

Sally's Bookshelf: What inspired this story?

Susan: History was my favorite subject in school. Privateer's Apprentice grew out of an interest in the pirate era, combined with growing up in Florida and hearing stories about pirates and buried treasure.

SB: What sort of research did you do to give your book such authenticity - and how long did it take?

Susan: When I sat down to write Privateer's Apprentice I remember thinking: so, what do I know about pirates? I quickly realized that most of my knowledge came from Hollywood. I thought all pirates had peg legs and had parrots perched on their shoulders. In order to write the book I wanted to write, research wasn't an option - it was a necessity. It wasn't too difficult because I'm so interested in that time period. It took a while, though, because I took lots of breaks along the way, raised my kids, went back to college... all in all, the research and writing took several years.

SB: What did you learn that surprised you as you worked on your book?

Susan: That many pirates were mostly decent men who were just trying to earn a living after Queen Anne's War ended. That was the mind-set in developing the captain's character.

Susan: I hope so!

Have Fun! This is part of the Marvelous Middle-Grade Monday round-up. Check out more great reading here. Review copy from publisher.