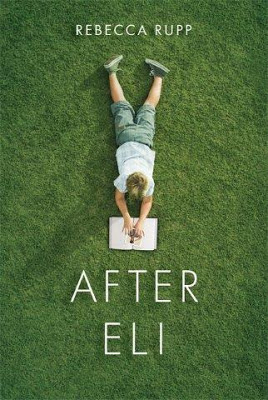 Daniel's full name is Daniel (E.) Anderson. That's not the name printed on his birth certificate; Daniel added the (E.) after his brother, Eli, was killed when his truck ran over an Improvised Explosive Device in Iraq. To the folks in town, Eli is a war hero.

Eli's death leaves a hole in Daniel's heart and a lot of questions. To help sort through all those questions, Danny grabs an old binder and creates a "Book of the Dead" -pages full of notes about people who died, how they died, and (most important) the reason they died. There's George Mallory, who died while climbing Mt. Everest. Danny wonders whether "because it's there" is a good enough reason for risking one's life. He wonders if Eli had a good reason to volunteer for the war in Iraq. He wonders whether things would have been different if his dad had allowed Eli to volunteer in New York City after 9/11.

Then one summer Danny notices a new neighbor: Isabelle. He makes friends with an unlikely ally. He starts working on an organic farm. He begins to grow into himself while coming to terms with his brother's death.

This is a book of place: rural Vermont, summer fields and fireflies. This is a book of how people connect: parents, friends, people you thought were friends but turn out to not be. It is a book full of struggle and emotional pain and wondering if you're going to be OK when you grow up. But even more, it is a book infused with love and filled with nuggets of wisdom - like the day Danny's working at the farm and tells Emma that "a real friend is someone who likes you for who you want to be and not for who they want you to be."

Sally's Bookshelf: What inspired this story?

Becky: The evening news. In the first years of the Iraq War, every news broadcast had moments of silence and a list of people who had been killed - most of them painfully young. Then, as we moved into our decades-long condition of permanent war, we stopped doing that. II thought that was weong. These are real people; when they're lost, whole families are devastates. I don't want us to forget the human cost of war.

SB: The characters are so real. Where did Emma come from?

Becky: She just blossomed. When I first wrote the book, Emma wasn't even a character. Then she was introduced as a minor character. And then she just took on an infinitely kind personality all her own. She's based a bit on my Aunt Bev, who never finished high school, married at seventeen and by most people's standards wasn't a success in life. But all of us adored her, ans she solved everybody's problems with love and by listening around her kitchen table.

SB: This is a book with many layers. How long did it take to write it?

Becky: That's so hard to judge - maybe a couple months for a first draft. Then second, third, fourth, fifth, sixth and seventh drafts. Then editor's comments and an eighth draft... I don't keep a writer;s notebook, but I do have a daily journal in which I note down all kinds of stuff: ideas for books, ideas for characters, interesting tidbits that might turn into plots. Sometimes I outline the whole story, sometimes I don't. Sometimes I write the ending first. As for research, in writing diction you have to know a whole lot more than you ever put in the book. Since After Eli is set in both present and past, I has a huge timeline that went year by year, starting when Eli was born until Danny was fourteen and meets Isabelle.

This is part of the Marvelous Middle-Grade Monday round-up. Check out more great reading here. Review copy from publisher.