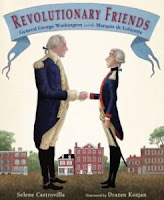 When 19-year old Marquis de Lafayette learns of the American colonists' struggles during the Revolutionary War, he slips out of France and heads to the New World. He braves 54 days at sea and, once he reaches land, another month of travel to reach City Tavern, where he offers his services to George Washington's army. The colonists are leery at first, but Lafayette proves his mettle during battle, and he and Washington become fast friends.

The story centers around the September 11 Battle of Brandywine Creek, a loss for the Americans, But author Selene Castrovilla continues the story of Washington and Lafayette's "revolutionary friendship" in copious back notes, along with a timeline of Lafayette's life. She also intersperses the text with bits of letters and journal entries from Lafayette and punctuates the action with appropriate exclamations in French. There's a list of French phrases at the back -  but you won't need it.

This is a great introduction for someone who wants to know who Lafayette is. It's a bit dense for younger readers, but jam-packed with Revolutionary action and resources for kids who want to explore further. And it's a nice story about friendship that endures across hardship and distance.

Join Nonfiction Monday and check out more nifty nonfiction at Practically Paradise. Review copy provided by publisher.
Posted by Sue Heavenrich at 12:30 AM