We've got a winner! The winner of Fatal Fever by Gail Jarrow is Danielle. Congratulations, and look for your copy in the mail. Now on to today's book.... which somehow got buried at the bottom of my book basket. 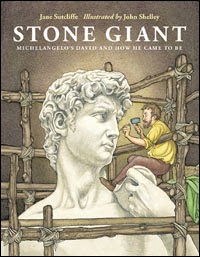 Stone Giant: Michelangelo's David and how he came to be
by Jane Sutcliffe; illus by John Shelley
32 pages; ages 6-9
Charlesbridge, 2014

Ever since I was a kid, I've been intrigued by Michelangelo, a Renaissance painter, sculptor, poet, and architect. His "real" name is Michelangelo di Lodovico Buonarroti Simoni which, if you try to say that all in one breath, is probably why most people simply called him Michelangelo.

But I digress... this book begins with an enormous block of marble that is taking up space in the city of Florence. The city fathers wanted a statue of David - the heroic kid who felled a giant using only a sling, a stone, and his smarts. But things didn't turn out as they planned.... no sooner would an artist begin cutting into the stone than he'd quit or die.

Nobody knew what to do with this huge block of marble. Not even Leonardo da Vinci. Until Michelangelo came to town. He looked at the stone.... and he saw what others didn't: the David who was waiting to be released. So Michelangelo built a shed around the block of stone and went to work with his hammers, chisels, and a special drill.

It took a long time ~ three years ~ to chip the stone away from David, and Michelangelo stopped only when he had to eat or sleep. But finally, there he was. David. Ready to face Goliath.

David has been standing for more than 500 years, but Sutcliffe breathes so much life into her story that you can almost hear the chiseling, and taste the marble dust floating in the air. The illustrations are warm, providing plenty of visual details. Plus there's back matter for curious readers.

Today we're joining the roundup over at the Nonfiction Monday blog where you'll find even more book reviews. Review copy provided by the publisher.