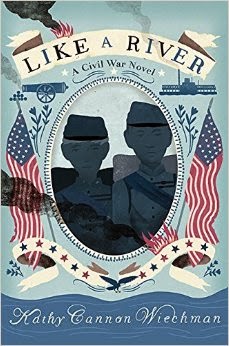 Fifteen-year-old Leander Jordan's life is full of chores, with a bit of fishing when he can manage, and spending time with a girl he's sweet on. But when he decides to up and join the Union Army, his life changes. He lies about his age, but the guys in the unit can tell he's on the young side. They call him "mama's boy" and tease him about his youthful stature and looks. And when he's wounded in his first battle it isn't even a Rebel bullet what gets him.

Paul Settles heads to war for different reasons, crossing paths with Leander in the army hospital Leander. Paul writes letters home for wounded soldiers who can't write. Paul brings them water. But like Leander, Paul has a secret. And when Leander discovers it, Paul knows it's time to light out for a new unit.

And then there's Given McGlade, who meets up with Paul at the infamous Andersonville prison. These three characters have so much life in them that you forget they aren't real people. That's OK, though, because their experiences were real - to hundreds of people in the 1860s. The starvation and deprivations of Andersonville were real. The sutlers - peddlers that sold food and supplies - to the imprisoned troops were real. The southern mansions-turned-hospitals were real. Attempted escapes and forced marches were real.

Finally, when the POWs were released, many boarded the Sultana to ride the Mississippi north, to home. Wiechman includes that real maritime disaster as well. It's amazing that people made it home from that war. But they did and they had stories to tell - some with endearing endings, like this book.

You can find out more about author Kathy C. Wiechman at her website, and read Kirby Larson's interview with her here.

Today is Marvelous Middle Grade Monday and we're hanging out with other MMGM bloggers over at Shannon Messenger's blog. Hop over to see what other people are reading. Review copy provided by publisher.
Posted by Sue Heavenrich at 12:30 AM