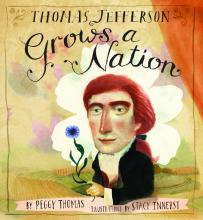 "Thomas Jefferson loved to grow things," begins Peggy Thomas. He grew potatoes and peppers, pippins and peaches and peas. "Throughout his lifetime, he scattered seeds, like a brisk wind, around the world."

He even helped grow the nation, writing the Declaration of Independence. But there was one thing that bothered Jefferson: a French naturalist wrote that wildlife in the new country was small and weak.

So Jefferson set out to prove him wrong. He wanted to introduce Europeans to American wildlife and crops - and he got the chance to do that when Congress appointed him "minister plenipotentiary" to France. There, in his garden he planted corn and watermelons, and he passed out persimmon plants and sumac seeds to friends.

This is a delightful look at Jefferson's agricultural explorations and his attempts to "grow" a nation from the soil on up. Back matter includes discussion about the Founding Fathers' struggle over a vision for this new nation: one of agriculture and farmers? or one of merchants and industry?

Today we're joining the roundup over at the Nonfiction Monday blog where you'll find even more book reviews. Review copy provided by the publisher.
Posted by Sue Heavenrich at 12:30 AM