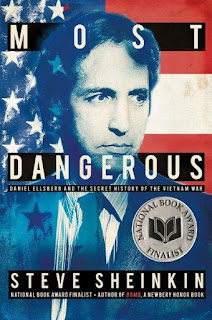 Most Dangerous: Daniel Ellsberg and the Secret History of the Vietnam War

This is a riveting tale of intrigue and power… a tale of an obscure government analyst turned whistle-blower that reads like a fast-paced spy novel.

“In the summer of 1964, Daniel Ellsberg was thirty-three,” writes Steve Sheinkin. After serving in the Marines he worked as an analyst with the Rand Corporation, a think tank that focuses on military and international issues. He was asked to work on a project focusing Vietnam as our country headed into war.

At that point, Ellsberg was hawkish. He believed the US was doing the right thing. He also knew that to get good information, you had to actually go to where the action was, so he visited Vietnam.

Upon his return, he tried to show that peace was preferable to continued war, but the presidents – first Johnson and then Nixon – didn’t want to “lose” a war. So the fighting escalated, with more and more young men being drafted and sent to die.

As he collected information, Ellsberg realized that his government was deceiving the people. He came to the realization that he would have to do something to end the war. That’s when he decided to photocopy thousands of pages of what became known as the Pentagon Papers – a study that revealed the US bombings of Cambodia and Laos and other activities not reported in the media. The papers demonstrated that the Johnson administration had systematically lied to the people and to the Congress about what was going on in Vietnam.

Forty years later history repeated itself. This time with Edward Snowden, and instead of seven thousand pages of photocopied documents, a flash drive. But the big questions are the same. “Governments must keep some information secret in order to function – but how much secrecy is too much?” asks Sheinkin. Is there ever a time when citizens are justified in leaking information about their government?

On Monday we're joining the roundup over at the Nonfiction Monday blog where you'll find even more book reviews.  Review copy from the library. 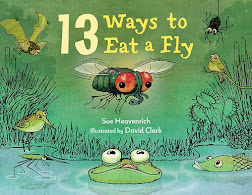