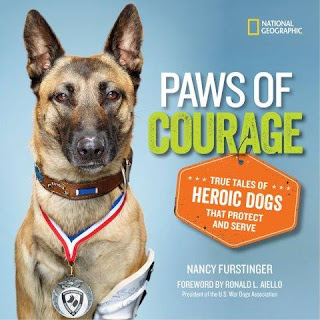 Last week the focus was on a fictional dog doing rescue work. Paws of Courage contains 22 stories about real dogs doing real work with their military or police partners.

It begins with tales of "historic hounds" - military dogs serving in World War I and World War II. Like "Sergeant Stubby", a pit bull-terrier mix serving in the infantry, who captured a German spy single paw-edly. Then there's "Smoky", a tiny Yorkshire terrier no bigger than the shoe of his soldier.  Smoky rode in a backpack, shared K-rations, and helped string wires through a pipe beneath an airstrip.

Around 2,500 military dogs served in Afghanistan and Iraq. Their jobs included searching for explosives hidden in homes, car bombs, roadside IEDs, and weapons. Some worked with medics, others with special forces, parachuting from planes with their handlers. Like their humans, military dogs received care packages - though theirs contained dog booties and cooling vests.

Search-and-rescue dogs work with police and fire rescue teams to help locate people trapped in rubble after earthquakes, tornadoes, and other disasters. Others are trained as lifeguards, or work with search teams to find lost hikers. Some dogs are trained to sniff out agricultural pests, drugs, and other things sent by mail or air cargo. Review copy from publisher.
Posted by Sue Heavenrich at 12:30 AM