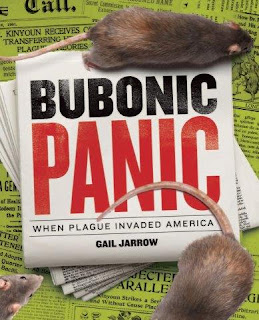 This is the last stop on the week-long blog tour ~ and I'm so pleased to present...

"The killer was a master of stealth. It moved undetected, sneaking from victim to victim and always catching its targets by surprise."

How can you resist reading on? In this, her third in a series of books on deadly diseases, Gail Jarrow skillfully blends medical mystery, history, and a dose of political nonsense.

Bubonic plague went by many names: The Pestilence; the Great Mortality; Black Death; and The Plague. It was marked with high fever, headaches, weakness, achiness, chills - sometimes nausea and diarrhea. Corpses piled high. Nobody knew who - or what- the killer was. Doctors tried their usual remedies, from bleeding with leeches (1600s) to sterilizing victim's homes - or burning them (1800s). By the 1894 outbreak in Hong Kong, doctors thought it might be germs, and they began looking for the culprit. Sure enough, it was a bacteria.

But identifying the deadly microbe was only part of the battle. Scientists and public health officials had no idea how it was transmitted- plague victims often caught the disease even though they had no contact with another victim. Could it be rats?

People living in rat-infested buildings got sick. But people who handled rats that were dead longer than a day didn't catch this disease. Could it be fleas, wondered scientists? And - in a world where ships traveled across the globe - how could health officials keep infected rats, fleas, and people from introducing plague into the local population?

It was only a matter of time until plague reached the shores of the US, in Hawaii and San Francisco. While doctors and scientists worked to learn more about the disease and develop vaccines, local politicians fought against quarantines. Shutting down ports was bad for business, and if word got out that there was plague in town then tourists wouldn't visit and the economy would suffer. When news finally did leak out, papers across the country ran headlines warning that tourists were fleeing "plague stricken" San Francisco. When quarantines were instituted, enterprising lawyers sued the town claiming discrimination. The quarantine barricade curved to include a Chinese grocery store but not the neighboring business owned by a white man, he said. 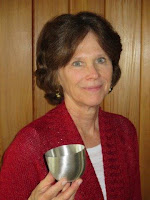 I caught up with author Gail Jarrow last week and asked her three questions about her book and the plague.

Sally: What inspires you to write?

Gail: I loved reading when I was a kid, and once I learned that I could put my thoughts on paper, I fell in love with writing.

Sally: Plague is still around - last year the media reported that a teen in Oregon was infected.

Gail: Yes, but plague is only found in the arid parts of the western US. It's not just found in rats, but also in other rodents - burrowing animals that live in colonies, like prairie dogs and ground squirrels. In shared burrows, fleas don't have to hop very far to get on a new host.

Sally: Why was it so hard to figure out how to treat Bubonic plague?

Gail: For many years people thought it was spread by a germ. The "germ theory" was fairly new, and when they cleaned up homes and burned seriously infected areas, they reduced the rat population. The resulting decrease in plague cases made it look like it was a germ that was the culprit.

Gail's other books in the "deadly diseases trilogy" are about Pellagra and Typhoid. Learn more about Gail and her projects at her website. As for her next project, it's about hoaxes and gullibility. "We need to be more skeptical about the news we hear and read," she says.

If you missed the other stops on the book tour, here they are:

On Monday, May 16 the Nonfiction Detectives hosted a post.
Tuesday, May 17 it was KidLit Frenzy
Wednesday, May 18 the tour stopped at Unleashing Readers
Thursday, May 19th's stop was at Teach Mentor Texts


GIVEAWAY RULES: If you'd like a chance to win a brand-new hot-off-the-press copy of Bubonic Panic, then please do both of these things:
Giveaway ends on Thursday, May 26.