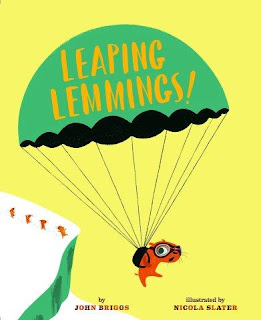 Would you jump off a cliff just because everyone else is doing it? Larry wouldn't. He is different than the other lemmings. Larry is adventurous: he goes sledding with puffins and when other lemmings eat moss (a pretty normal lemming thing to do) Larry orders pepperoni pizza.

And when that fateful day arrives and all his friends are running to the edge of the cliff, Larry comes up with a way to save them from their demise. 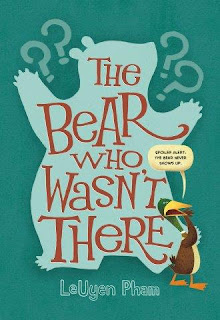 The author of this book would have you believe that Bear is the star of this book, and has gone missing. But clever Duck knows that Bears are unreliable. If you want some one reliable, you should get a Duck.

"How about I tell you a nice duck story?" he asks.

Meanwhile everyone else is looking for Bear. Is he behind the door that says "Private. Keep Out"? Oops! You should not have opened that door. But if Bear is not around, who is leaving all those muddy bear tracks? You know things are getting silly when the illustrator has to holler for all the animals to show up for roll call.

Still, the question remains: if Bear isn't there, where is he?

Both books are perfect antidotes to gray early March days when we're caught between the seasons. If you're looking for some beyond-the-book activities, check out these lemming activities from a an earlier post. Want another animal story? Head over to Archimedes Notebook for a true story about a fox.

Review copies and ARCs provided by publishers.
Posted by Sue Heavenrich at 12:30 AM