So you thought spring was coming...
It is - just not as fast as you were hoping. In the meantime, heat up a cup of cocoa and grab some "thought it would be spring but it's not" reading. Here's one I recommend: 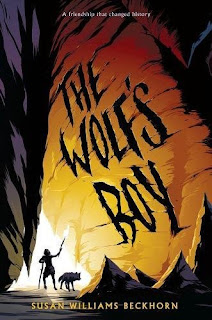 I could not get free. The string of spit dripped closer. My brother was good at this game...

It doesn't matter whether you're living in the 21st century or back at the time when cave bears roamed, brothers haven't changed much. Especially when you're the weaker one.

Susan Beckhorn's tale transports us to that time just before wolf-relatives would become domesticated companions and partners with humans. This is a story of Kai who, by fate of birth, is an outcast. He longs to become a hunter - but born with a clubfoot he is forbidden to use hunter's weapons.

Kai has secrets; he was abandoned by his family and taken in by a mother wolf. Eventually Kai was reclaimed by his family, but he has never forgotten his wolf family. Nor have they forgotten him. When Kai discovers a motherless wolf cub, he brings her home to live with him. If you've ever had a puppy, you know that they like to chew things, like your best moccasins, the leather straps for your snares and traps. So Uff (the pup) and Kai are eventually exiled, and head north to a place where dangerous Ice Men live.

One of the things I love about this book is the language. Beckhorn introduces us to the culture of hunters by using their words: keerta (spear), nnnn-gata (hunter's prayer for luck). And especially oooni-alu-kas-pah-vard-ahh (fire-haired traveler with big hands, hear, and voice).

We'll be hanging out on Marvelous Middle Grade Monday with other  bloggers over at Shannon Messenger's blog. Hop over to see what other people are reading. Review copy from author.