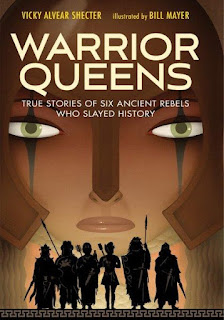 The ancient queens Vicky Shecter writes about didn’t go looking for trouble. Trouble came looking for them – usually invaders who wanted their land and riches. But these ladies pushed back. Hard. “They fought in chariots, on ships, and even on elephants,” writes Shecter.

So who were these queens? One was Hatshepsut, a powerful female pharaoh who ruled Egypt about 3500 years ago. Married at 13, widowed by 16, she proved to be a plucky leader – and one who kept the economy strong by building roads and monuments. And, when required, went to war to strengthen the borders of her country.

About 1400 years later, Amanirenas ruled a powerful African kingdom in Nubia (what’s now Sudan), just south of Egypt. Queen Amanirenas ruled a rich land, where women were respected and had power. Then Roman emperor Caesar Augustus invaded Egypt. Seeking even more treasure, the Romans attacked five Nubian cities. Queen Amanirenas was not amused. She led her warriors on a counterattack, taking back her cities and destroying Roman military outposts as well.

Eighty years later, in ancient Britain, Queen Boudicca led a rebellion against the Roman army. Her Celt tribe had been living in uneasy peace with the Romans, but when Boudicca’s husband died, the Romans stomped into her village. They wanted everything – money, food, horses. When Boudicca challenged them, they dragged her into the village center and whipped her. As the Romans destroyed Celtic culture, Boudicca planned her attack. She and her blue-painted warriors swarmed the biggest Roman city. They freed the slaves, looted the city, and left nothing but smoldering rubble. She went on to destroy an entire Roman legion and burn Londinium to the ground.

Shecter includes plenty of sidebars on topics ranging from forensic anthropology to religion and ancient medicine. Each chapter includes chapter notes that fill in the details. Back matter includes endnotes, a bibliography, and index.

Thanks for dropping by today. On Monday we'll be hanging out at Marvelous Middle Grade Monday with other  bloggers. It's over at Greg Pattridge's blog, Always in the Middle, so hop over to see what other people are reading. Review ARC provided by the publisher.