This month Sally’s Bookshelf is Going To the Dogs! This week we’re going on an adventure – to the California Gold Rush. 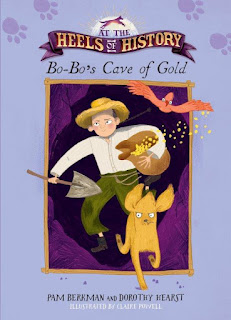 It’s 1852 in the Sierra Nevada foothills of California. Sage has been kicked out of the pack. “You’re weak,” snarls the pack leader. “We have no place for a dog who puts some scraggly two-legged creature ahead of her own pack.”

Now, a moon’s cycle later, she is accosted by a mouthy parrot. It nips her tail. It jabs her paw. It calls her names (silly, sad-faced, soggy dog!) – and eventually leads Sage to a stream where a boy is trying to move a big rock in a river. The boy, Sheng, is searching for gold, with his father and uncle. With his mind on finding gold, the boy gives the dog a new name: Bo-Bo, little treasure. But will Sage/Bo-Bo be strong enough to help?

A bear escapes, some bad guys want to jump Sheng’s family claim, and Sheng and Bo-Bo must find gold to pay back a debt. Of course there’s a cave, rattlesnakes (what would a western be without snakes?) and a treasure map. 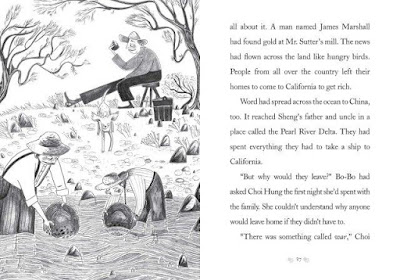 What I like about this book: It is fun to read! And it’s an engaging story – especially if you love stories about heroic dogs. I also like that there is back matter. An author’s note spills the beans about the facts behind the story, and raises a few questions. For example: prospecting is hard work, and most folks who flocked to the gold rush never struck it rich. And yes, thousands of men traveled from China to the gold fields. They left China to escape war and famine, only to face racism in America. Not only did Chinese prospectors have to pay a “foreign miners” tax, white prospectors harassed them and sometimes stole their claims.

The authors also discuss the impact of the Gold Rush on Indigenous people and African Americans, as well as what a dog’s life would be like in California at that time.

Bo-Bo's Cave of Gold  is second in the series that began with Filigree's Midnight Ride (I reviewed that one in December). There will be more in the series - great stories for kids who love dogs and long for adventures that Might Really Have Taken Place....  Review copy provided by Blue Slip Media.