Dog on a Secret Mission 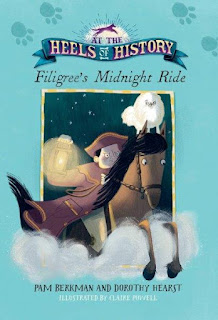 It’s April 18, 1775 in Boston, Massachusetts and Filigree is headed toward danger. “He might be the smallest dog in Boston,” write the authors, “but he was ready to fight for freedom.”

Even if he is only a five-pound Pomeranian. Filigree wants to help pull tent stakes out of the ground where the Redcoats have set up camp. But the other patriot dogs think he is nothing but a lapdog – an insult if ever there was one.

Like the colonists in their families, the dogs of Boston are divided into Loyalists (loyal to the King) and Patriots. They alert “their” people when the opposition forces are nearby, and conduct their own missions. Which is how Filigree becomes an unlikely participant in a certain midnight ride.

What I like about this book: It is fun to read! And it’s an engaging story – especially if you love stories about heroic dogs. I also like that there is back matter. An author’s note spills the beans about the facts behind the story, and raises a few questions. For example, what took John Hancock and Sam Adams so long to leave town? Did they stop at a tavern for “refreshment”?

Filigree’s Midnight Ride is the first book in the new “At the Heels of History” series. Look for future books in this series. Coming next year: one story set in the gold rush, and another focused on a dog separated from his family when they reach Ellis Island.

Looking for another series for dog lovers? Check out my reviews of the Dog Chronicles here, here, and here.

Review copy provided by Blue Slip Media.
Posted by Sue Heavenrich at 12:30 AM