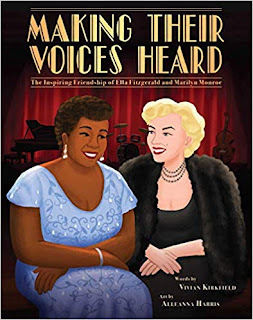 My colleague and friend, Vivian Kirkfield, has a new book coming out next month. Making Their Voices Heard is an inspiring story about the friendship of two amazing women, jazz singer Ella Fitzgerald and movie star Marilyn Monroe. I invited Vivian to share her thoughts about how they stepped outside the norms society had set for them.

Take it away, Vivian!

Thank you so much, Sue, for inviting me over today. Ella Fitzgerald and Marilyn Monroe made their voices heard onstage and in the fight for gender equality and against discrimination. I feel so honored to tell their story.

Back in the 1950s, most women didn’t have much control over their lives. It wasn’t until the Equal Credit Opportunity Act of 1974 that a woman could get a credit card or a mortgage without having it co-signed by a male relative. Literally and figuratively, women were put in a box – a bit like Barbie dolls on department store shelves. They were expected to act and dress a certain way, and carry out certain roles like being a mother, secretary, nurse, or teacher. Even female entertainers had to stay within the confines of society’s strictures.

And then, along comes Ella Fitzgerald. Although she had a difficult childhood, once she won the Amateur Night at the Apollo Theatre, Ella believed in her talent – her gift for singing jazz. It gave her the strength to fight for what was right and remain true to herself. When she was bumped from a Pan Am flight on her way to Australia for a concert tour in 1954, she sued the airline for racial discrimination…and won! This was before Rosa Parks refused to give up her seat to a white passenger on a bus. It was before Martin Luther King, Jr’s “I Have a Dream” speech. Ella was breaking down the walls that society had erected around her. 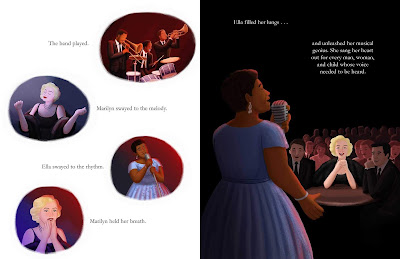 Marilyn Monroe also had a sad and difficult childhood. Growing up in an orphanage, she’d stand on her bed and act out scenes from movies before bedtime. Many choices she made were because of the box society had put her in. She agreed to get married at age 16 to avoid being returned to an orphanage. And after signing with a movie studio, Marilyn was in more of a box than ever before. The studio told her what color lipstick to wear and what parties to go to.

But Marilyn had a mind of her own. She went overseas to entertain the troops in Korea.  She visited jazz clubs in New York City – at a time when jazz clubs were places most white women did not go to. And she loved Ella Fitzgerald. Marilyn listened to Ella’s records to prepare for a big singing role in the movie, “Gentlemen Prefer Blondes.” When critics gave her rave reviews, and studio bosses agreed to give her more control over her script choices, Marilyn bought a ticket to Ella’s next show so she could thank her in person. 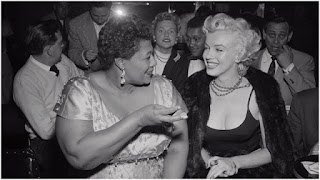 After the show, Marilyn and Ella shared their hopes and dreams and plans of what might be. Ella revealed that she’d been unable to get a booking at one of Hollywood’s top clubs. The owner didn’t want ‘jazz’ music at his nightclub, and he didn’t want a plain-faced, overweight black woman performing for his guests. But, after a phone call from the wildly popular Marilyn, and because Marilyn had agreed to sit in the front row every night, the club owner agreed to give Ella a week’s booking.

Many of us know of Ella Fitzgerald as one of the greatest, if not the greatest, female jazz singers. In the first year of the Grammys, 1959, Ella won Best Female Pop Vocal Performance and Best Improvised Jazz Solo…another example of how she broke down the barriers. And many remember Marilyn Monroe as the sexy blonde bombshell – but how many know that she was the first female movie star to start her own movie production company?

I hope my book will help children realize how important it is to stand up for what is right and to make your voice heard…to stand by your friends…and to be inclusive when choosing those friends. I’m honored that I got the opportunity to write this story and I’m thrilled that it has become a real book that will inspire parents and children alike.

Thank you so much, Sue, for giving me the opportunity to visit with your blog readers. 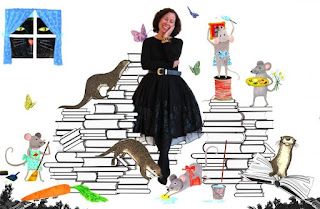 The next couple of months will be busy and exciting for Vivian. On Saturday, January 18 she has an 11am book launch at Barnes & Noble bookstore in Nashua, NH. On January 24 she’s participating in an Author Night at her granddaughter’s school in Chicago, and in March she’s heading to New York City for a book event Books of Wonder. You can keep up with her at her website and by following her  on Facebook , Twitter, and other social media.

Once the holidays are over, we'll be joining Perfect Picture Book Friday, an event where bloggers share great picture books at Susanna Leonard Hill's website.
Posted by Sue Heavenrich at 12:30 AM