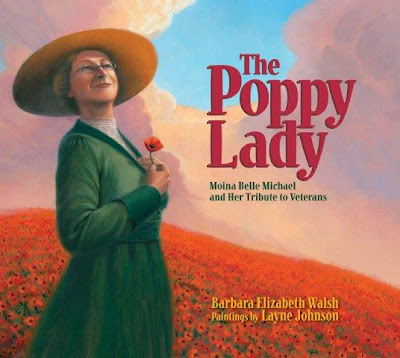 The Poppy Lady: Moina Belle Michael and Her Tribute to Veterans
By Barbara Walsh; illustrated by Layne Johnson
40 –ages; ages 7 and up
Calkins Creek, 2012

In April 1917 the US entered World War I. Moina Belle Michael was teaching at the University of Georgia’s Normal School when the news was announced, and she vowed to do everything she could for American soldiers headed off to fight.

Moina knitted socks and sweaters, She rolled bandages for the Red Cross. But she wanted to do more.

So Moina delivered books and candy to the training camps. She went to the train station to see them off. But she wanted to do even more.

Inspired by reading McCrae’s poem about “Flanders fields where poppies blow…” Moina knew what she would do: wear a red poppy to remember those serving, and encourage others to do the same. With a lot of pluck, a bit of luck and a bushel of persistence, Moina eventually convinced veteran’s organizations to adopt the poppy as their memorial flower. This work of historical fiction, based on interviews and news articles, adds details and context to an important period in our country's history.