Summer on the Moon 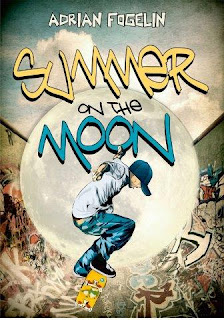 Socko and Damien are as different as two kids can be. But they go to school together, live in the same apartment, and are best buds. Now, during the summer before eighth grade, they have to figure out how to keep away from the gangs and keep each other out of trouble. After Damien stands up to the local gang leader, Socko says, “Next time I’ll have your back. I promise.”

Then his mom says they’re moving. Away from their dilapidated apartment to a real house. Somewhere safe, where people don’t end up dead on the ground. A house with a lawn, and maybe a hedge, says mom.

But that means leaving Damien behind, without a buddy for protection.

Then there’s the new house. It’s in the Moon Ridge Estates – a fancy housing development that never quite got off the ground. Or finished. And there’s the General- Socko’s great-grandfather who will be living with them. Who, Socko decides, might let Damien move in if he can figure out how to get on the crotchety old guy’s good side.

Socko runs reconnaissance for the old man. By skateboard, he explores and maps out the territory. But who is the girl who keeps following him? And what’s with the black SUV’s? And where are the neighbors? Most of all, is Damien OK?

This is a story of friendship, family, and finding community. It doesn’t gloss over the realities of urban poverty, but doesn’t dwell on them either. Instead, there’s an underlying hope for the future.

This is part of the Marvelous Middle-Grade Monday round-up. Check out more great reading here. Review copy from publisher.