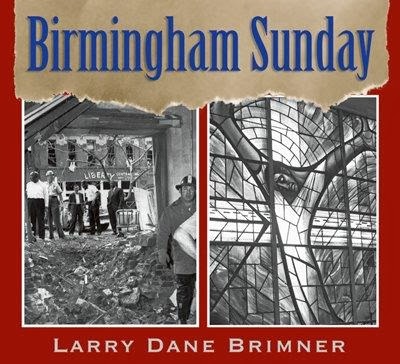 During the Civil Rights movement, the Sixteenth Street Baptist Church served as a rallying place for Birmington, Alabama's African American community. Martin Luther King Jr. used it as his "headquarters" when he was in town speaking about desegregation and equal rights. Because of that, the church - and Birmingham - became a target for attacks... bombings that were threatening but not deadly.

That changed on Sunday, September 15, 1963. Early in the morning, three Ku Klux Klan members planted 19 sticks of dynamite outside the basement of the church. At 10:22 am they exploded, killing four  young girls - Addie Mae Collins, Carole Robertson, Cynthia Wesley and Denise McNair - and injuring 22 others. The young people had come to prepare for Youth Day.

Rather than paralyzing the black community with fear, the bombing galvanized the community and guaranteed passage of the 1964 civil rights legislation.

Larry Dane Brimner writes about Birmingham Sunday, putting it into historical context. From the Supreme Court's 1954 Brown vs Board of Education decision through George Wallace's 1963 inaugural speech, Brimner shows how segregation was woven into the fabric of southern life. Words and photos show the Good Friday march that led to King's arrest, the resulting unrest, and the eventual compliance with federal orders to integrate the schools.

The Birmingham Sunday blast came just days later. Brimner does more than document the events; he brings history to life and puts human faces on the suffering. This thin book is filled with photos, biographies of the young people who lost their lives, and the struggle to find justice.

"When I began my research, realized that Addie Mae, Cynthia, Carole, and Denise were almost always referred to as the 'four little children'," Brimner writes in his acknowledgment. He did not want their names to be forgotten to history.  Nor did he want the other two children killed that day, Johnny and Virgil, to be forgotten.