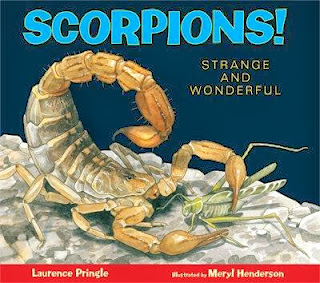 "It is twilight in the desert," writes Pringle. A lizard scurries to the safety of the rocks when, "Suddenly it is grabbed by a scorpion's powerful claws. The lizard struggles. It tries to break free..."

But we know what is going to happen. That lizard is toast... or at least dinner. There are almost two thousand different species of scorpions, and they live in a diversity of habitats: tropical forests, seashores, deserts, high mountains, and even in deep dark caves. Four hundred million years ago scorpions measured three feet long... modern scorpions are not quite so large.

By the time you get to the end of the book you know how many legs and eyes scorpions have, how their mouths are designed for ripping apart prey, and how desert scorpions can move across hot sand. Pringle shares a list of things they eat (anything that moves, including other scorpions) and gives us a glimpse of family life. Scorpions have courtship dances, exchange scorpion kisses, and give birth to live babies. Yes, baby scorpions don't hatch from eggs like other arachnids. they even ride around on their mom's back for a short time while their cuticle hardens. But then it's time to scatter and hunt on their own.

"Real scorpions," writes Pringle, "...are fascinating creatures, vital in their natural habitats, and full of secrets yet to be discovered."

Today is STEM Friday - head over to the STEM Friday blog to see what other people are talking about in science. Don't step on any scorpions on your way! Review copy provided by publisher.
Posted by Sue Heavenrich at 1:00 AM