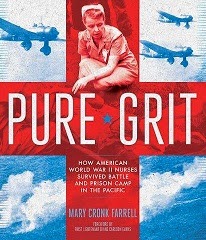 We might never have heard their stories if Mary Cronk Farrell hadn't gone back to read an email from her cousin. Her cousin had written a paper for nursing school about military nurses captured in WWII - enough to tickle Farrell's curiosity and she started researching.

But, back to the war. By Christmas eve it was clear that hospitals were in danger. So the nurses put what they could on a bus and "moved" their hospital into the jungle of Bataan - a deserted cluster of sheds with palm-thatch roofs at a former training camp. Without electricity they had to figure out how to sterilize medical instruments (they used Bunsen burners and pressure cookers).

Farrell focuses on the personal stories of the nurses, weaving in the war history. She shares their letters, diaries, and fills the pages with archival photos. There's a treasure of back matter: a glossary, timeline, endnotes and bibliography highlighting books suitable for young readers. If you've got a kid who needs a topic for a history paper, put this book in her hands. Check out interviews with the author here and here.