Sackets Harbor Powder Monkey and the War of 1812 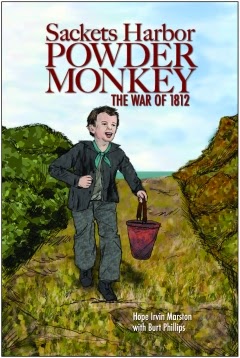 It's the fall of 1810 and young Rankin McMullin can't wait to see the warship Oneida. She should be pulling into the harbor any day now. So before dawn, he sneaks out of the cabin and makes his way to the harbor.

There she is: a grand vessel with two huge masts - a brig that will help protect Sackets Harbor from a British invasion. And he, Rankin McMullin, intends to be part of the crew. There's only one problem.... Rankin is 11 years old.

Not everyone is thrilled that a warship has anchored in town. What if she stops their lucrative - but illegal - business of shipping smuggling potash to Canada? Still, Rankin wants to serve aboard the Oneida, even if it means lying about his age. His job: powder monkey - they guy who carries the powder from the hold to the cannons. It's a dangerous job, even when everything goes right. But when things go wrong, Rankin has to improvise.

Author Hope Marston has written more than 30 children's books, many of them nonfiction. I caught up with her last week to ask three questions about the Powder Monkey.

Hope: It started when the site manager at Sackets Harbor Battlefield asked me to write a children’s book about the War of 1812. That was two years before the Bicentennial Celebrations, and she hadn't been able to find any books for kids about the war. At first I wasn’t interested; war is not my favorite topic.  But once I decided to do it, and began my research, I discovered the first two battles of the War of 1812 were fought at Sackets Harbor on Lake Ontario. I decided to focus on the first, fought July 19, 1812.

Sally: Tell me about your process, what sort of research you did and how you got the story to the page.

Hope: I began by  investigating library materials and permanent displays at the Battlefield in Sackets Harbor.  One of the most helpful things I found there was a list of the local men who enlisted when the warship Oneida came to Sackets looking for recruits. That’s where I found the names of my characters - including the powder monkey, Rankin McMullin.

I did a lot of library and online research and visited the museum at the battlefield. I attended the annual re-enactment weekend at Sackets, where I could ask questions and see just how a long gun was loaded. O attended other reenactments and a couple of area "War of 1812 Symposiums". I also read any historical novel about the War of 1812 I could - they helped me learn how to express myself in nautical war terms.  Also a colleague who grew up in Sackets Harbor taught me such things as there are no “steps” on a warship. Those things that look like steps are referred to as “ladders.”


Sally: Why did you decide to tell it as historical fiction rather than write a nonfiction book?

Hope:  My first drafts were nonfiction, but, according to my Critique Group, they lacked kid appeal. I scratched my head trying think what would make kids want to read my book - powder monkeys! I couldn't remember reading about them, but must have somewhere along the line ... because when that thought came to me I knew I wanted to pursue it.  When I searched the ship's log for names I noticed that the  enlistee’s job on board was listed as well. When I read Rankin McMullin’s name, he was simply listed as boy. I knew I had my main character.

The Sackets Harbor Historical Society liked the story so much that they asked me to adapt it for a stage play. So I contacted a local playwright who got a grant for making the adaptation and agreed to direct the play. The premier is scheduled for Sackets Harbor in mid-November.

Hope has a page at her website filled with videos and more about Sackets Harbor Powder Monkey.  She's just finished another historical novel set in almost the same time period called Hannah Brown, New England Pioneer and it is, as she puts it, "out looking for a publisher".

Visit Sackets Harbor Battlefield State Historic Site. During the summer, guides dress in military clothing of 1813 and reenact camp life of the soldiers. August 1 - 3 is their annual War of 1812 reenactment. Learn more about events here.
Posted by Sue Heavenrich at 1:00 AM