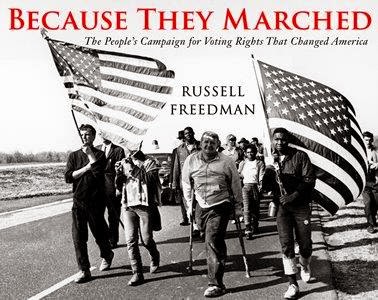 Because they Marched: The People's Campaign for Voting Rights that Changed America
by Russell Freedman
96 pages; ages 10 & up
Holiday House, 2014

If you are looking for a book to read this week, then put this one in your book bag. The photos and stories will take you back 50 years to the Selma march. In fact, the book begins with a story of the day the teachers marched - January 22... only a few days from now. It was a scary decision for them, because marching for the right to vote could mean losing their jobs. But they had to stand up for right, and stand up for their student's futures.

If you listen to the news, you know that some states are making all kinds of rules about what people need to do to vote: have drivers licenses, or special voter ID's. Those rules, they say, will keep "illegal" people from voting - people who aren't citizens. But if you live in a rural area, the drive to a state office where you can get those IDs could be a long one. And there's usually no public transportation. And if you are poor, then you might not even be able to drive. So the rules end up hurting many people who are citizens, depriving them of their right to vote for congressmen and the president.

Back in the 50s and early 60s there were a number of obstacles to voting as well - but they were intended to prevent black American citizens from voting. Obstacles like requiring a reading test, or cutting office hours to only a couple days a week for limited time.

Eventually the protests culminated in a people's march from Selma to the capital of Alabama, Montgomery. People flooded in from across the country, and Martin Luther King, Jr. led the march. Or marches - because it took three tries. Finally, on March 25 the marchers arrived after walking 54 miles, to be greeted by 25,000 supporters. A long walk may not sound very exciting - especially in the rain and cold - but this march put the spotlight on injustice and paved the way to the Voting Rights Act of 1965. It was a great achievement.

Unfortunately, voter ID laws created by states over the past couple years are undermining the progress this country made to ensure that every citizen born in this country, regardless of gender or skin color or religion, has a say in how we govern ourselves. This is an important book not only because of the past history, but also because of the time in which we find ourselves.

Today we're joining the roundup over at the Nonfiction Monday blog where you'll find even more book reviews. Today is also Marvelous Middle-Grade Monday round-up. Drop by Shannon's blog to see what other reviewers are talking about. Review copy provided by publisher.