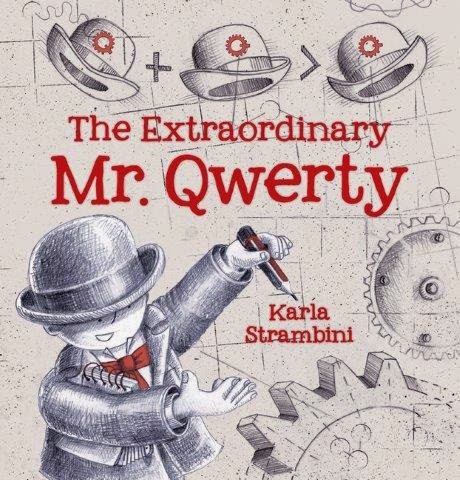 opening lines: There once was a man named Norman Qwerty... whose ideas were far from ordinary.

Mr. Qwerty keeps his fantastic ideas under his hat because they are SO unusual that he worries other people will think his ideas are strange. And usually his ideas stay under his hat until one day a very extraordinary idea escapes and grows into something so large and marvelous that something just has to be done about it.

What I like about this book: It's plain fun - from the name Qwerty (which  anyone who uses a keyboard knows) to the whole "keeping your ideas under your hat" theme. I love that other people have unusual ideas under their hats, too and that, in the end, it takes a group to bring an idea to fruition. I also like the artwork. The black & white illustrations have one or two colors added here and there, so the reader can really spend time looking at the details. They have the feel of architectural drawings: gears, mechanical things.

Beyond the book: "Keep it under your hat" is an idiom - hey! didn't we feature an idiom last week? So, what does "keep it under your hat" mean?
Make a hat to keep your ideas under. If you don't have a hat, don't worry. You can make one out of a few sheets of newspaper. After you're finished folding the brim and taping it, glue some decorations on it and then think of all the ideas you could carry around under it. Keep some paper & markers handy so you can draw some of your marvelous ideas!
One of the ideas under Mr. Qwerty's hat is a flying device. What sorts of marvelous flying devices can you imagine? Draw one and tuck it under your hat.

Today is PPBF (perfect picture book Friday) over at  Susanna Leonard Hill's site. She keeps an ever-growing list of Perfect Picture Books.  Review copy provided by publisher.
Posted by Sue Heavenrich at 12:30 AM