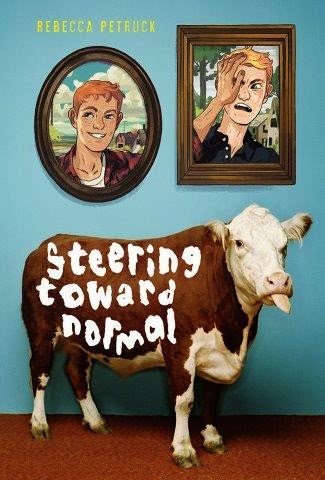 Eighth grade is going to be different, Diggy promises himself. For one thing, he won't name his 4-H calf - he's learned from first-hand experience that naming steers destined for auction never ends well. And this year he'll be less shy around July - now a senior, and the reason he attended his first 4-H meeting.

His first resolution lasts 10 minutes, about the length of time it takes to unload his new calf and  be rewarded with a pile of warm steer manure on his boots. "Joker!" Diggy says... and it sticks. A name.

Within hours his "going to be awesome" year gets another whack: Wayne Graf is left on the doorstep. Wayne's mama died and his real father happens to be Diggy's father - Pops. OK, maybe having a brother won't be so hard after all.

Then, Wayne decides he wants to raise a steer and try for the prize: scholarship money. Suddenly Wayne and July seem to be spending more time together and Diggy is on the outside.

What a great coming-of-age novel, penned by author Rebecca Petruck who has an inside scoop on county fairs, having served as 4-H president herself.

Today we're hanging out with other bloggers over at the Marvelous Middle-Grade Monday round-up. Drop by Shannon's blog to see what other reviewers are talking about. Review copy provided by publisher.
Posted by Sue Heavenrich at 12:30 AM