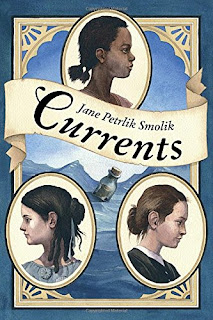 Bones, Lady Bess, and Mary Margaret have never met and don't know each other, but a bottle bearing a message crosses the ocean - twice- connecting their lives. Bones is a slave, working in Virginia in the fall of 1854. She was too young to remember the day her pappy had been sold to another landowner - "but she remembered everything about how she learned she was the personal property of another human being."

When Bones finds the Slave Birth Records for the plantation, she tears out the page with her name and birth date. Burdened with this incriminating evidence of her actions, she rolls the paper up, puts it into a bottle, adds a heart carved by her pappy, and seals the cork with wax. Then, in the dark of night, she sneaks down to the James River and tosses the bottle as far as she can.

The bottle bobs its way downstream and into the Atlantic where it gets picked up but the Gulf Stream current and pulled across the sea.

In August of 1855 Lady Bess finds the bottle, half buried in sand, on a narrow beach on the Isle of Wight. Could it be from pirates? Lady Bess wants to be an explorer like her father, and she's heard plenty of tales of adventure on the high seas. But no. When she unfurls the paper it says only: Agnes May Brewster. Born: July 1843. Colored slave. When a lad who works for the farm is accused of stealing, Bess discovers who the real thief is and determines to help her friend escape from jail. She gives him the bottle, adding a treasure of her own. Maybe when he reaches London he can find someone who can help solve the mystery of Agnes May.

Instead of reaching London, the bottle ends up traveling with the North Atlantic Drift back across the ocean. Mary Margaret discovers it bobbing against the pilings when she and her da go to the wharf to buy fish. It looks like a genie bottle and when she opens it she finds an engraved gold cross with pearls embedded in it, and the birth record of Agnes May.

Three very different girls whose lives touch each other's because of a bottle. Could a bottle really travel from Virginia to England and back to Boston? In back matter, author Jane Smolik writes about the history of sailors placing messages in bottles. Using ocean current charts, she figured out where a bottle tossed into the James River might land. Then she had to learn what was happening across the world in the 1850s to tie the stories together.

A fun story backed by research, sure to appeal to kids who love exploring history and mysteries. Review copy provided by the publisher.