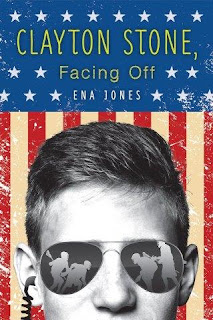 Just in time for this year's elections: a book of political intrigue, dirty tricks, and lacrosse. Thirteen-year-old Clayton Stone is busy prepping for the lacrosse play-offs. His school, Master's Academy, stands a chance - if they can beat Sydney Brown.

Then he's recruited to go undercover to protect the President's son. At Sydney Brown school. That means working his way onto the team so he can stay close to POTUS JR. And that means playing against his own team on the play-offs.

No sooner does he show up at Sydney Brown, than the school is put on lock down. It's a regular drill, but how's the new kid to know? Now he's on the "watch out for" list... and the President's son makes a point to avoid him.

Not only that, it's election season, and the students are voting for next year's student leaders. The school presidential debate is coming up (yes!) and someone is stealing voters. A plucky school reporter is hot on the story and wrangles Clayton into helping. The plot thickens when a senator's son (who is an overbearing bully) engages in dirty tricks and Clayton suspects the dastardly deeds at school extend all the way to Capital Hill.

As Clayton prepares for the lacrosse play-offs he tries to determine the end-game. A fun read - perfect for this season of debates. Check out this awesome interview with Ena Jones over at the Mixed Up Files.