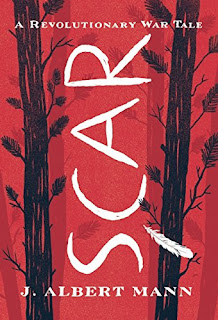 It's a hot July day in upstate New York in 1779. Noah is alone in the woods, except for a young Mohawk. They both lie wounded, after a bloody battle.

At the age of 16, and despite his lame foot, Noah has taken on the work that would normally have fallen to his father. His father is gone - not to fight the British, but felled by disease. Then a Mohawk band storms their farm, burning everything. Noah and his family hide in the woods. When the villagers gather, they decide to track the Mohawks and fight, against the advice to wait for help to arrive from Washington's army.

Noah volunteers and is paired with a doctor. The march is hard; the battle worse and their unit wiped out. Wounded, Noah tries to find help. That's when he discovers the wounded Mohawk warrior, whom he names "Scar". Noah bandages him and provides water and comfort through the night.

Told in first person, the chapters alternate between July 22, the day of the Battle of Minisink, and earlier events leading to the battle. We discover that Noah has dreams of building a farm, and a girl to share those dreams with. This story brings to life a part of the Revolutionary War we don't hear much about and raises questions regarding what a hero is.

Back matter includes information about the Mohawk chief Joseph Brant and the battle, along with biographical sketches of main characters who are real people. A bibliography provides additional reading for curious young historians.

You can find more information about the battle at the Minisink Valley Historical Society.