I love books about dinosaurs! The more the better - so I was ecstatic when two show up in my review basket.
themes: dinosaurs, imagination, adventure 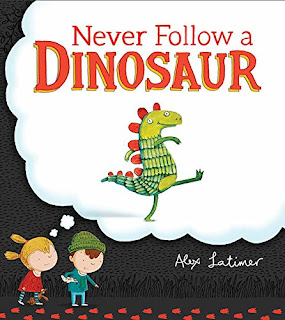 One afternoon, Joe and his sister Sally spotted a strange set of footprints.

When Sally asks who made them, Joe is certain they are dinosaur footprints. The intrepid duo set out to follow them. They pass by the empty pet food dish. "It must be a very hungry dinosaur," said Sally.

What I like about this book: you can almost hear the scary music building in the background as Sally and Joe follow footprints that indicate a hungry, heavy dinosaur. They follow clues that lead them to think the dino has been dancing, swimming... and then they decide to build a trap. Then they learn that hungry dinosaurs should be left alone.

Author/illustrator Alex Latimer takes on dinosaurs in a fun way. You can see some of his artwork at his website, and read reviews of his previous books, Pig and Small and Lion vs Rabbit. 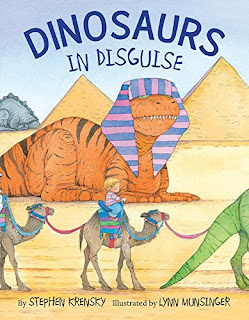 Most people believe that dinosaurs are long gone.
But not me.

The young narrator of this tale is certain that the dinosaurs that ruled the earth for millions of years could have survived the impact of an asteroid. They're not extinct, just smart enough to stay hidden - especially once humans emerged on the planet.

What I like about this book: the imaginative ways that dinosaurs could blend in to our modern world. "You can find them if you look hard enough," says the narrator - and he sees them everywhere, from traffic light supports to department store Santas. As he imagines dinos in the present era, he realizes that humans might have to clean up the place a bit before the dinos come out of hiding.

Find places dinosaurs might hide if they were in disguise. Are there places in your neighborhood? Could they be disguised as workers? Lamp posts? Draw a picture showing how you would hide if you were a dinosaur.

Make a picnic and invite a dinosaur along. If you are wondering what dinosaurs eat, check out Archimedes Notebook for ideas.